It looks like we finally have confirmation from Disney that Annual Passholders at both Disney World and Disneyland will be VERY relieved to hear!

It seems in light of the recent decision to extend the temporary closures at both parks indefinitely, they’ve made some amendments to their AP refund and payment policies!

Below you’ll find a screenshot of the updated information regarding Disney World Annual Passholders. While previously we had reported your Annual Pass Membership will be extended for however many days the parks remained closed, Disney is ALSO now offering a partial refund option to guests who have already paid in full and want to forgo having their tickets extended.

If you’re on a monthly payment plan, effective April 5th all monthly payments are being waived until the parks reopen AND Disney will be refunding any payments made between March 14th and April 4th!

If you have any questions, you can contact Disney World’s Annual Passholder Support at (407) 939-7277. They are expecting a heavy volume of calls, so please be patient or wait a few days before reaching out if you can.

Disneyland is similarly offering its APs who have already paid for their passes in full partial refunds in lieu of extensions. They will also be delaying payments for their Annual Passholders who are making monthly payments until the parks reopen! Plus, Disneyland will also be issuing refunds for any payments made between March 14th and April 4th. 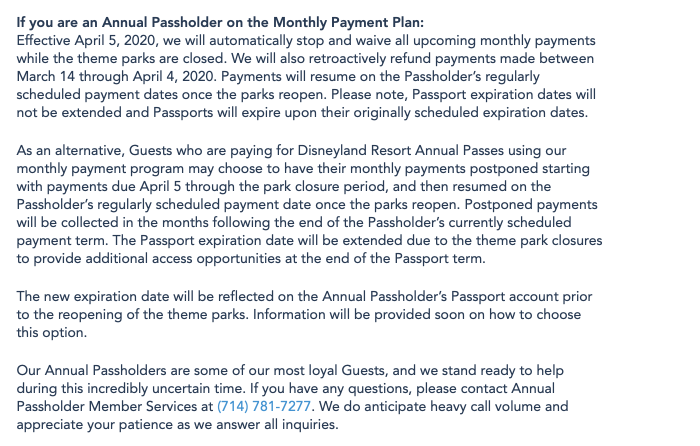 Any questions or concerns you may have can be directed to Disneyland’s Annual Passholder Member Services at (714)781-7277. Again, they’re expecting a lot of calls right now, so you might have to wait on hold for quite a while.

We will continue to update you on Disney’s closure and refund situation!