“Jambo!” from Disney’s Animal Kingdom! We’ve had quite the adventure exploring the park today, and we enjoyed our time so much, we thought we would share some of our experiences with you! 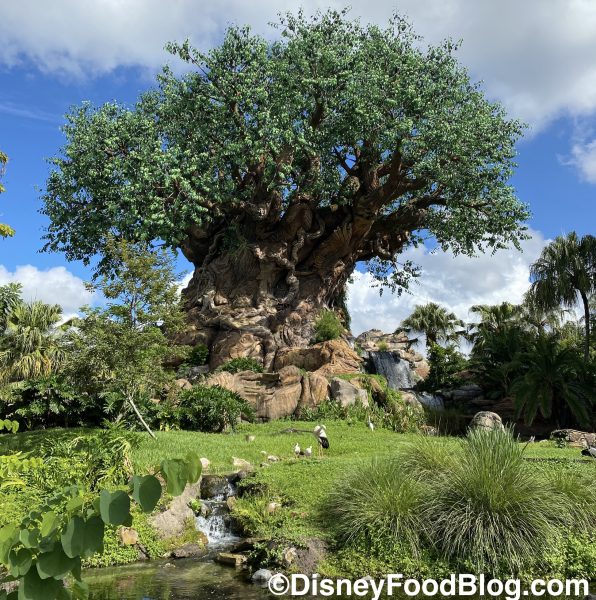 We recently shared 25 videos from our visit to Magic Kingdom, so today we thought we would look back on TWENTY videos we took today from Animal Kingdom!

When you enter the heart of Animal Kingdom, your sight is immediately drawn to the Tree of Life. This larger-than-life icon includes over 300 carvings of animals, both existing and extinct!

We are spending the day at Animal Kingdom! What should we check out? pic.twitter.com/dFmI2bQZxK

There’s something quite special about Animal Kingdom, and the atmosphere of this park is of the things we missed the MOST during the closures!!

We had a full day ahead of us, so let’s dive right in!

Take a look back at our first trip back to Animal Kingdom on its reopening day!

Our first stop was Pandora — The World of Avatar! Pandora is home to two attractions: Flight of Passage and Na’vi River Journey. While passing through, we noticed that Na’vi River Journey had a posted wait time of 30 minutes, so we decided to hop in line! The queues for all attractions are physically distanced, so they may look a bit longer than they actually are!

The queue for Na’vi River Journey is so serene! There’s something about those waterfalls that makes us completely forget about our worries and strife.

When we reached the front of the line, we boarded our boat, and off we went! The ride itself is also a super calming experience. And that shaman animatronic is SOMETHING ELSE!

After we left Na’vi River Journey, it was time for a refreshment! And since we were in Pandora, we had to order a Night Blossom from Pongu Pongu! If you’re feeling adventurous, you can also order a Rum Blossom.

Cooling off with the Night Blossom! pic.twitter.com/yuSalZruQs

Feeling quite refreshed from our time in Pandora, it was time to head off on our next adventure!

Want to see which Disney World rides have had the SHORTEST wait times? Click here to find out!

Just like that, we were off on safari! Every trip on Kilimanjaro Safaris is unique and different from the last, and you never know which animals you’ll spot!

Which animal is your favorite to spot? pic.twitter.com/cRkp0UxdJF

On today’s safari, we saw rhinos…

After a successful safari, it was time to travel from Africa to Asia!

All the space dedicated to the animals makes Animal Kingdom a MASSIVE park. Do you know which Disney World park is the smallest?

Next time you’re in Animal Kingdom, set some time aside to check out their many walking trails! One of our favorite places to visit in Asia is the Maharajah Jungle Trek.

And since this is Central Florida and NOT actually Asia or Africa, it started to rain as it does most days this time of year!

Luckily this rainfall was just a passing shower, and we were able to continue our journey!

Did you know there’s a new series coming to Disney+ about the animals in Animal Kingdom? Click here to watch the trailer!

On our way to DinoLand U.S.A., we spotted a character cavalcade! These mini-parades are extra fun in Animal Kingdom, because they take place on BOATS along the rivers surrounding Discovery Island!

We ventured over to DINOSAUR, which had a posted wait time of just 10-minutes! Now, let’s go get that dino!

Dr. Grant Seeker is CLEARLY up to no good yet again…

Trust me. What could go wrong?! pic.twitter.com/MwcpH17qKd

What could go wrong? PLENTY could go wrong. Before we knew it, it was time to hop into our Time Rover! Who else gets butterflies in their stomach when you’re about to ride Dinosaur?

We’ll admit, it’s difficult to be efficient at our task of dino-spotting when it’s so dark and spooky! Warning: you may spot a certain Carnotaurus in this next vid!

Once we were done doing Dr. Seeker’s dirty work, it was time to head out of Animal Kingdom! But before we left, we managed to catch one of the overhead announcement Disney plays throughout the day. The announcement reminds guests to wear proper face coverings and to observe physical distancing. Turn your volume up to give it a listen!

Volume up – you can hear the updated overhead face covering announcement! pic.twitter.com/5GmRMlpSQ4

We hope you enjoyed this (virtual) tour around the park! Until next time, Animal Kingdom!

Disney World has regularly been updating the overhead announcements. Click here to learn more about the latest update.

What is your absolute FAVORITE thing to do at Disney’s Animal Kingdom? Let us know in the comments!

« What’s New in Disney Springs: Fall Flavors, Lots of LEGOS, and SO Much Merch!
Channel Your Inner Disney Princess With Our NEWEST Disney Food Blog Masks! »