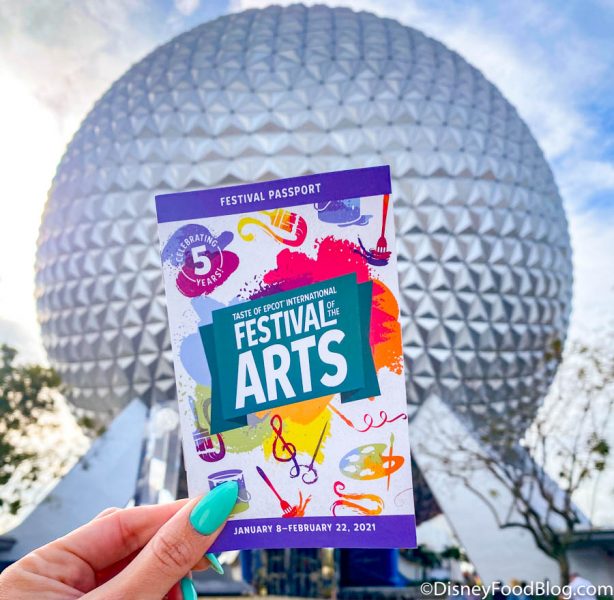 Today marks the first day of the 2021 EPCOT International Festival of the Arts. And while we’ve been having a ton of fun checking out all of the Food Studios, there are also some sneaky festival snacks hiding at permanent locations throughout the park!

If you need a little caffeine boost to power your way through the festival, we have great news. Each of the Joffrey’s Coffee & Tea Company locations throughout EPCOT is offering an exclusive candy-themed specialty drink and donut! 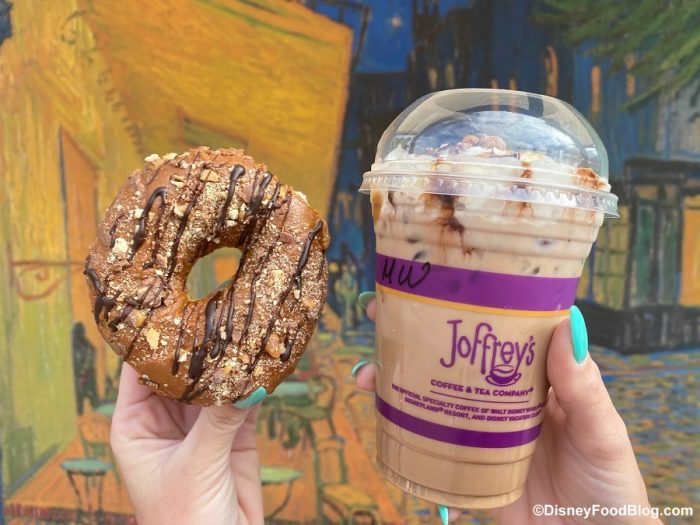 Each of the four Joffrey’s locations around EPCOT has its own unique offering, and all of the drinks can be served either hot or cold. It is important to note that these must be bought as a pairing, so if you’re looking to just buy the donut, you’ll need to buy the drink as well! We were told by one Cast Member that you can switch out the drink for another one on the menu, though that could make it more expensive. 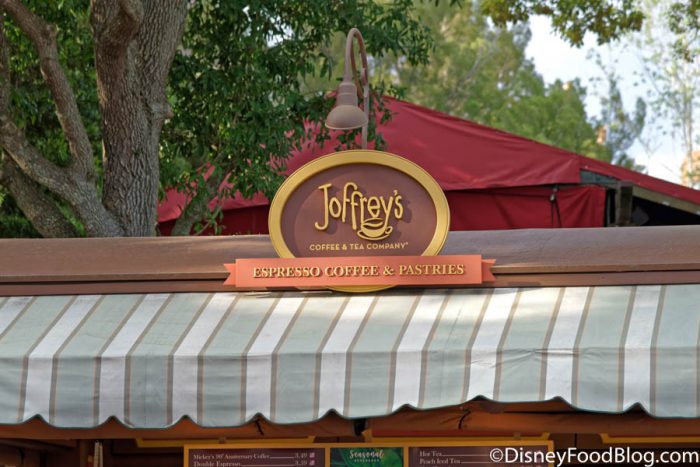 So, let’s dive right in with the specialty drink from the Joffrey’s located in Showcase Plaza! This location is serving up the Caramel Canvas Latte, an artisan latte with peanut butter syrup, caramel, and dark chocolate sauce, topped with Snickers candy pieces. 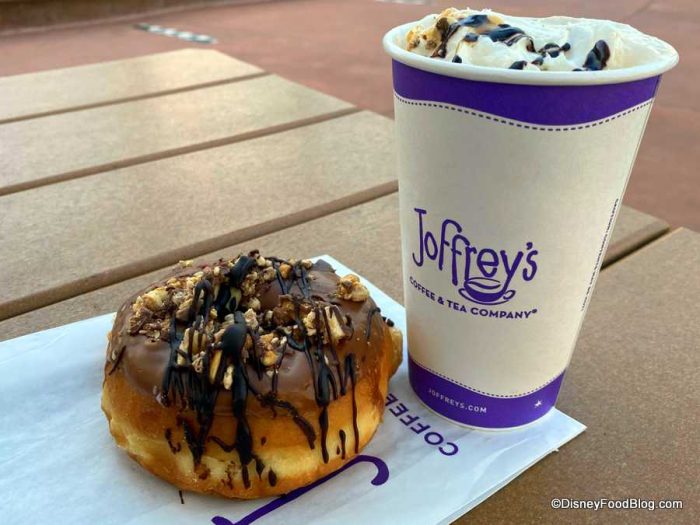 Keep in mind any of the latte offerings can be ordered hot or cold! This one would be a hit with peanut butter fans!

You can also pair it with a Snickers-topped donut! As for the donuts, we think any of the options would be great picks for kids. 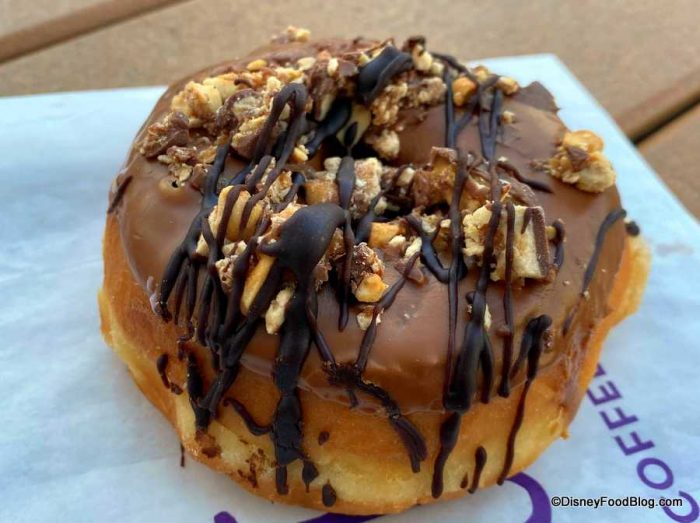 Look at that glorious donut!

Next up, the Joffrey’s located in the American Adventure Pavilion is serving the Color-Me-Latte, made with espresso, Swiss chocolate syrup, and dark chocolate sauce, sprinkled with M&M’s candy. 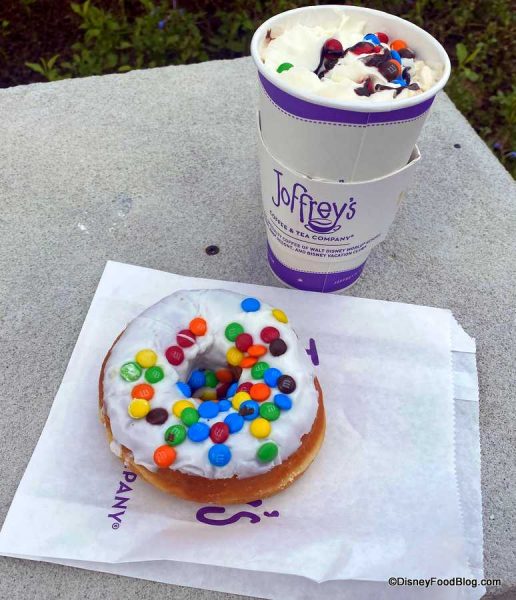 This is basically a mocha with M&M’s…sooo, it’s simple but AMAZING!

You can pair this one with an M&M’s-topped donut! We liked this one because the M&M’s add a simple sweetness to the already great donut! 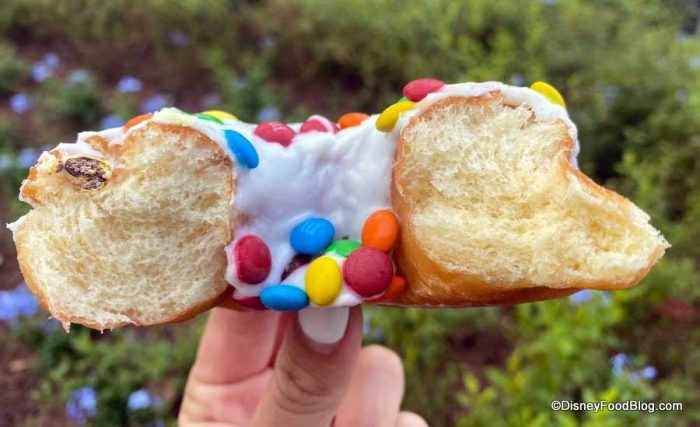 At the Joffrey’s in Future World East, you’ll find the Starry Night Latte, an espresso beverage with dulce de leche, white chocolate, and dark chocolate sauce, topped with Milky Way candy pieces. This is a sweet coffee but it’s very yummy. The flavors were less heavy on the dulce and more heavy on the white chocolate! 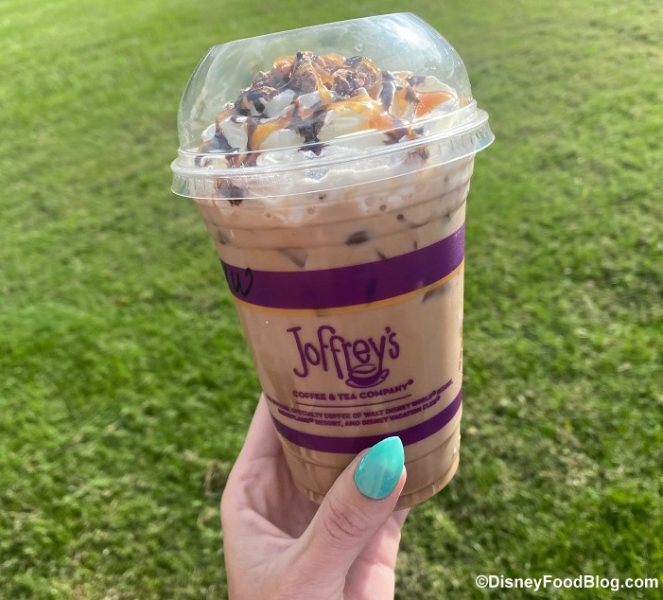 Of course, you can pair this drink with a Milky Way-topped donut! The donut has lots of yummy chocolate and caramel flavors. We enjoyed it! 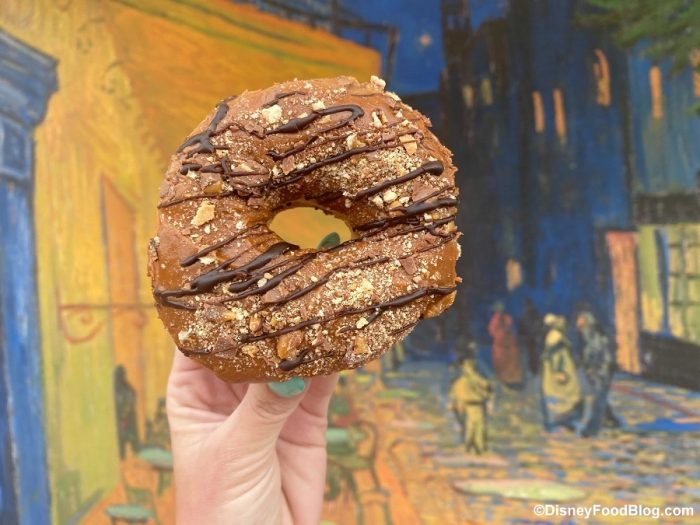 And finally, the Joffrey’s located in the Canada Pavilion is serving the Creative Twist Latte, made with brown butter toffee syrup and Swiss chocolate syrup and topped with Twix Original candy pieces. 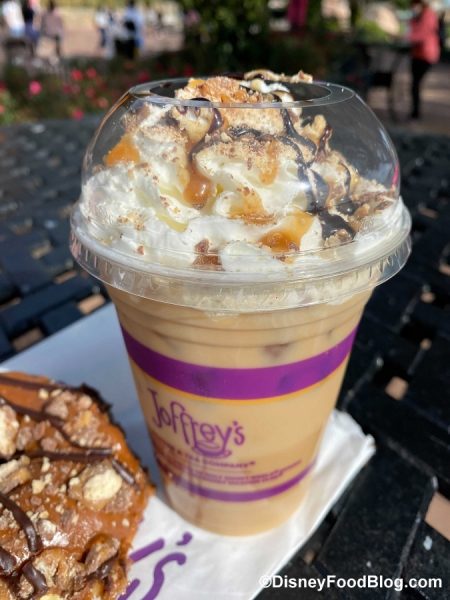 The toffee syrup gives this one a more interesting flavor than some of the others and we did enjoy it!

Try it paired with a Twix-topped donut! 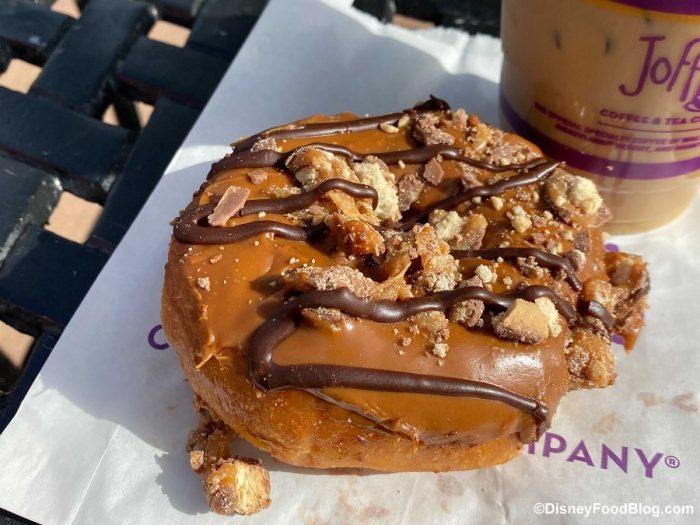 Unsurprisingly, we have no complaints about a Joffrey’s donut covered in candy. 🤷‍♀️

Warning! The following video will make you want a donut real bad!

Be sure to stay tuned while we continue our quest to check out all of the Food Studios and festival offerings around EPCOT!

Click here to learn more about the EPCOT Festival of the Arts!

Which of these do you think you would like best? Tell us in the comments!