Hello, friends! We spent the day at Disney World, reporting in on new Donut Minnie Ears (!) new drinks, and a water leak at the Polynesian Resort! 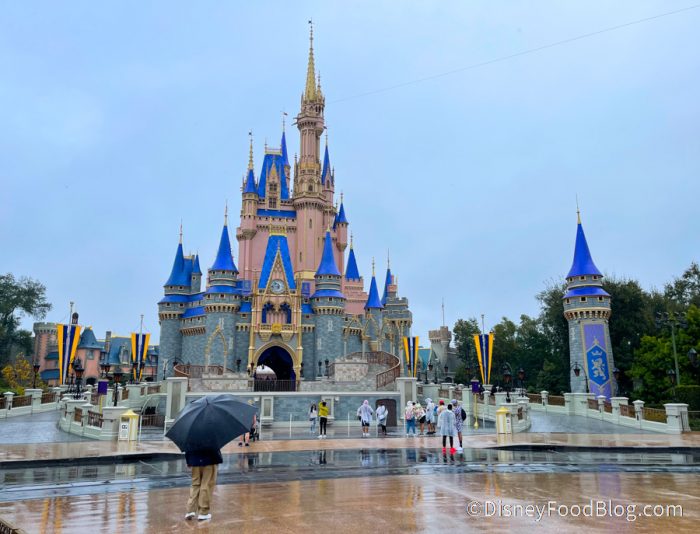 It’s been a busy and rainy day, but that doesn’t stop us from just taking time to enjoy everything at the parks so that we can get tons of photos and videos to share with you. Because it’s just not the same if we can’t bring y’all along with us!

So let’s start with this morning, when we were on our way! As you can see, the other Disney World entrance is still getting its new paint job. But we still get goosebumps every time we drive through it!

So where to next?

A little rain wasn’t going to slow us down. Because we were headed to the Magic Kingdom! 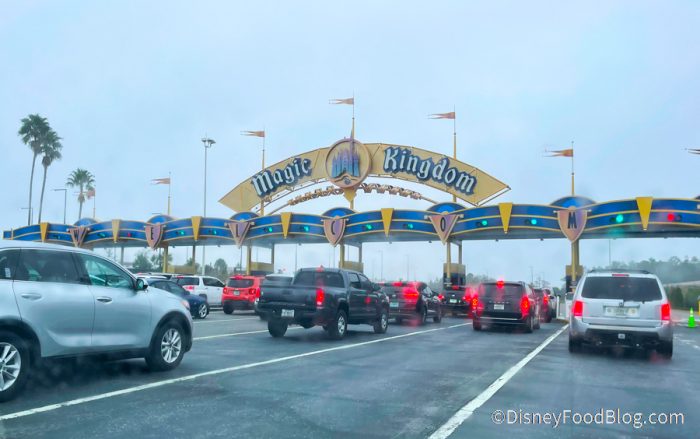 Hello, Main Street, U.S.A. There’s just something about hearing that iconic music and seeing the castle in the background that gets us emotional every time!

Mickey and Minnie don’t care about rainy days! They still came out to greet us! 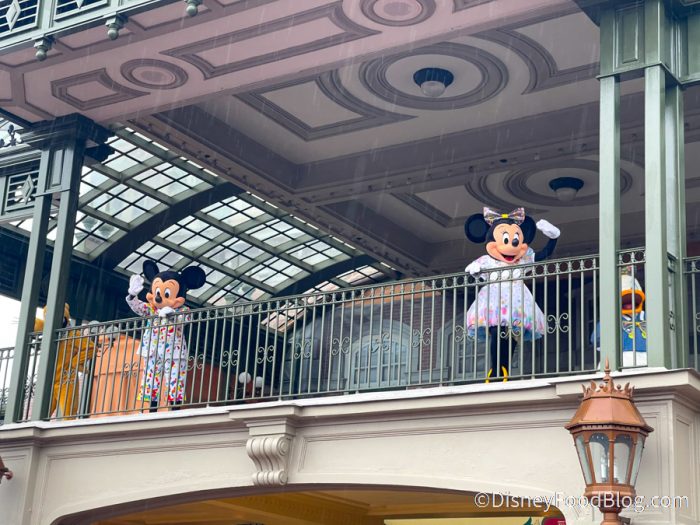 Our favorite place to go in Magic Kingdom when it’s raining is pretty much anywhere! We’ll just throw on our poncho or raincoat and enjoy the beauty of Cinderella Castle in the rain.

Favorite place to go in the Magic Kingdom when it’s raining? 🌧 pic.twitter.com/pZBco5b4s3

After we took in the view of the castle, like we’ve done a million times (and will do a million times more), we headed over to Adventureland for some adventure (seriously, it’s right there in the name). And no adventure is complete without Pirates of the Caribbean! 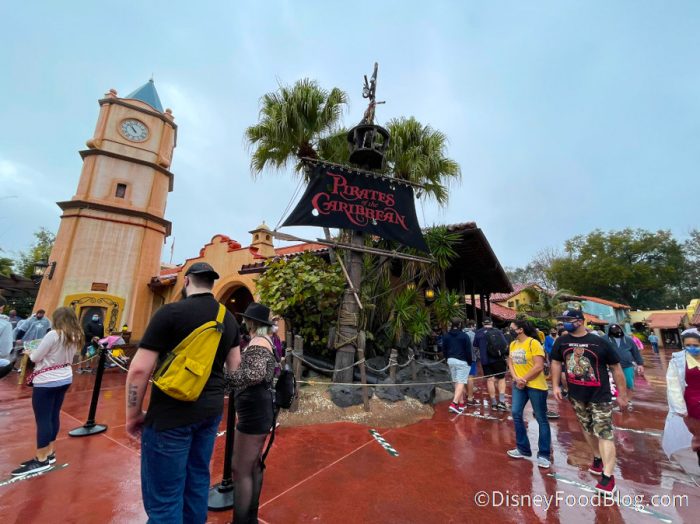 Join us for a ride with some of the most unsavory fellows to ever sail the Caribbean! Yo ho, yo ho! There was new additions of plexiglass in the queue, too.

We also got to say hello to our two favorite mischievous chipmunks, Chip ‘n’ Dale!

On to Fantasyland! We love how these vibrant colors always pop, especially on a rainy day! It really does feel like we’re living in a fantasy! 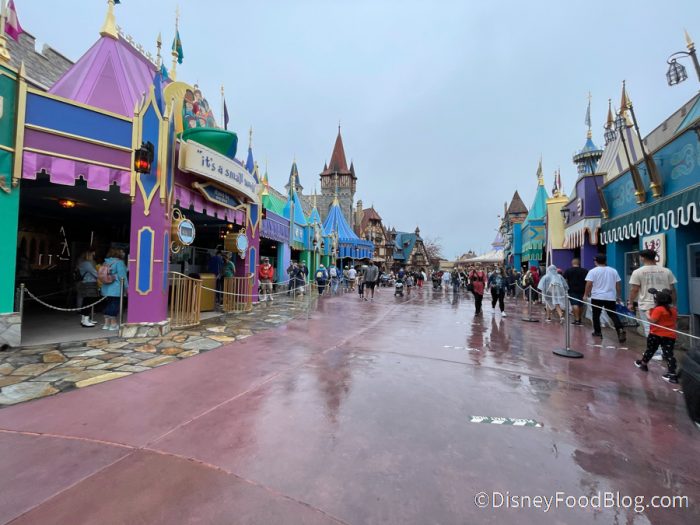 Fantasyland in the rain

We walked around a little more and noticed that a LOT of people were playing Sorcerers of the Magic Kingdom since its last day is tomorrow.

Have you ever played Sorcerers of the Magic Kingdom? pic.twitter.com/JVpvohwnC1

We’ll admit that we’re a little sad to see this fun Magic Kingdom activity go away.

We also had a reporter at Disney’s Hollywood Studios, and when we got there, things were looking pretty quiet. 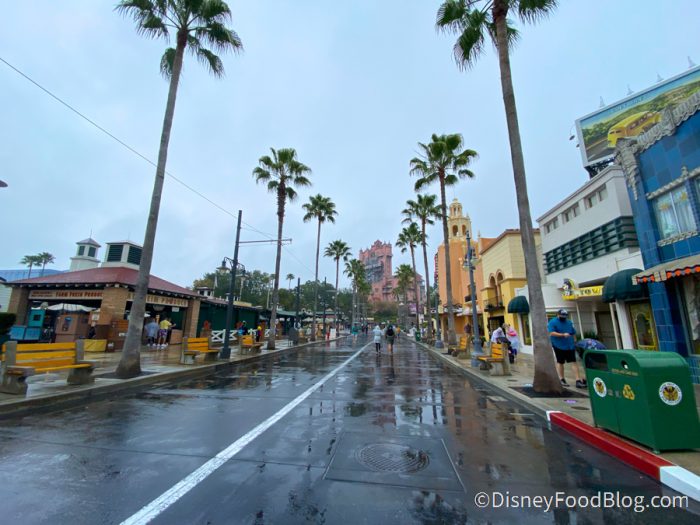 As we walked around a little, we got a surprise — one of our fave ice cream shops there, Hollywood Scoops, is now serving morning cocktails, an idea Disney is testing out. We approve. We TOTALLY had a Bloody Mary…

…AND a Mimosa because why not?!?

THIS is how to start a morning at Disney World!

Read our review of the new morning cocktails

After getting our morning cocktail hour on, we headed over to Toy Story Land — we always feel like a little kid (or toy) when we walk into this area! 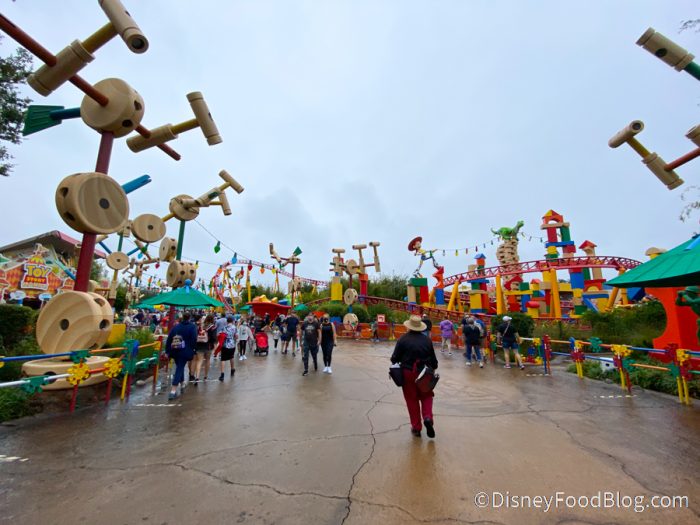 Ooh, let’s hit up Toy Story Mania and see if we can’t beat our high score!

Well, we were hungry again (it’s our job to eat food at Disney World, after all), and we decided to pop into BaseLine Tap House to have our favorite there, the Charcuterie Board. Tip: Always ask for extra bread! That bread is 🔥.

One of our favorite meals – Charcuterie Board from BaseLine Tap House in Hollywood Studios- we always ask for extra bread! pic.twitter.com/7EYc57SJMG

With very happy bellies, we headed over to The Darkroom to check out the new Minnie Donut Ears.

But wait, there’s more! We had ANOTHER reporter in EPCOT to check things out there. 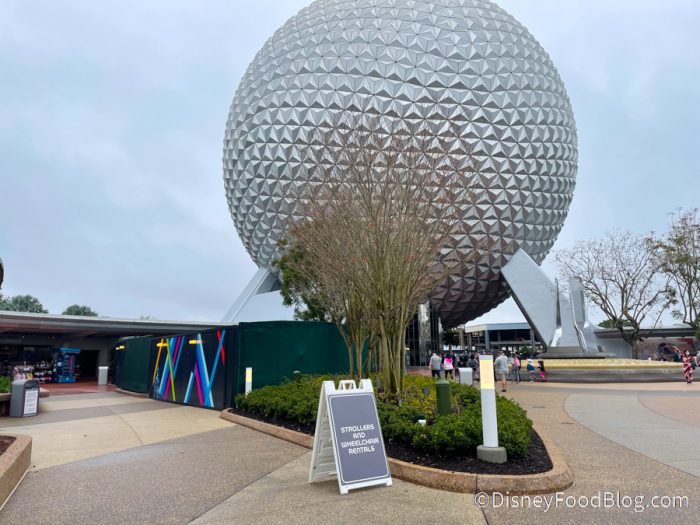 We walked around Spaceship Earth to check out the progress on the Expression Section, where guests get to paint part of a mural!

Have you done the Paint-By-Number mural in Epcot yet? pic.twitter.com/rnoANT7vtV

It’s a mural with Figment! This is such a fun EPCOT Festival of the Arts activity!

We walked around the World Showcase to see if any characters were out and got to see Queen Anna! All hail the Queen of Arendelle! 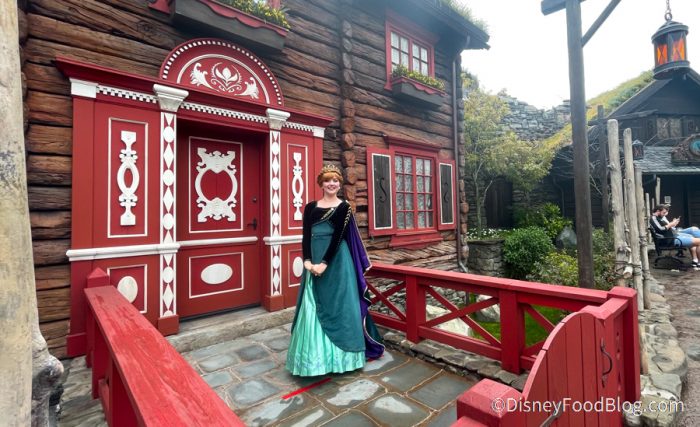 What a fun day! And we’ll be spending even more fun days at Disney World again, and yes, we will bring you along with us! So stay tuned!

PHOTOS: Don’t Miss This Hidden Detail in the Ratatouille Area at EPCOT!

What kind of photos and videos would you like to see from Disney World? Let us know in the comments!

« The NEW Minnie Ears in Disney World Are a Donut-Lover’s DREAM!
What’s New at Magic Kingdom: A Store Gets a Paint Job, ‘Up’ Pins, and More! »