It’s decision time! You only have 1 day in Walt Disney World and can only visit 1 park, and you have to CHOOSE between Magic Kingdom and EPCOT! 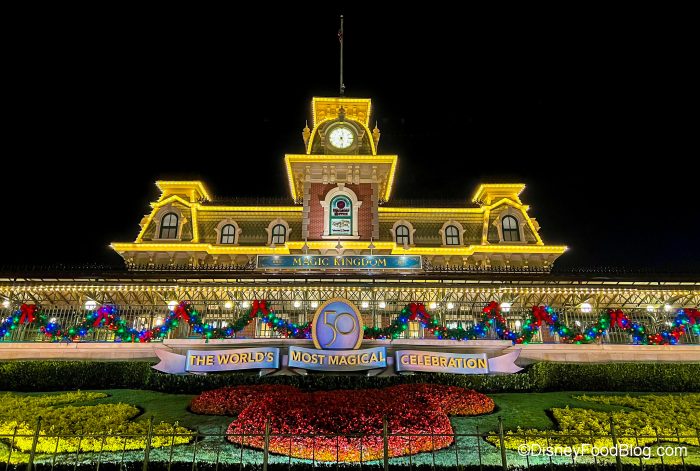 Magic Kingdom is the OG Disney World park, but EPCOT’s origins also trace back to Walt Disney’s vision of the Experimental Prototype Community of Tomorrow. Each is so different, and each so iconic, so how do you choose?

We’re gonna pair up Magic Kingdom and EPCOT in an epic throwdown in FIVE categories to see which park YOU should choose if you can only do one.

Our five categories are:

And because we’re Disney FOOD Blog, we’re starting out with our favorite category: FOOD.

Magic Kingdom has some decent eats. You can eat at Cinderella’s Royal Table inside the Castle. This dining option might just be the most iconic experience at Disney World. 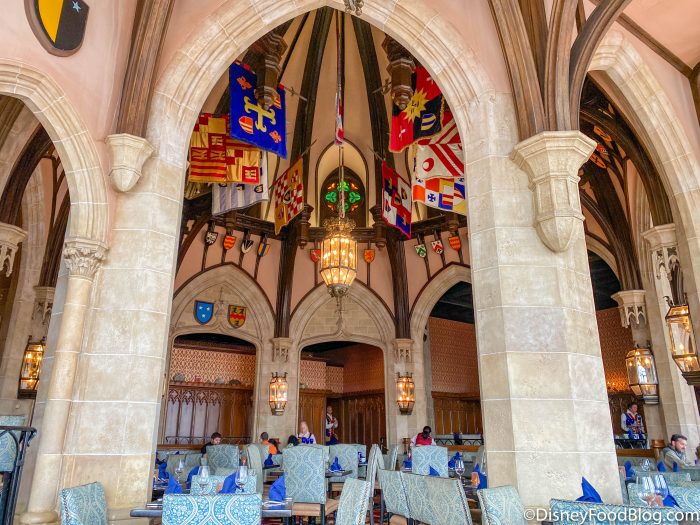 Dine INSIDE the Castle at Cinderella’s Royal Table!

There’s also Sleepy Hollow Refreshments which serves one of our favorites, the Fruit & Nutella Waffle. And we can’t forget about The Crystal Palace where we can dine with our favorite friends from the 100-acre wood, including Winnie the Pooh! One of the most atmospheric (and popular!) restaurants on Disney World property, Be Our Guest, is also exclusively at Magic Kingdom. Or pop next door and get our favorite ooey, gooey, ginormous cinnamon roll at Gaston’s Tavern (with extra icing, thank you)! 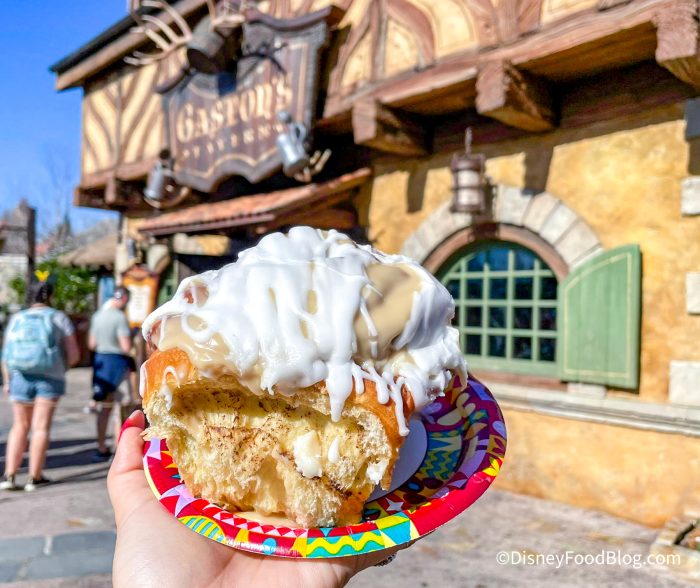 And we can’t forget about some of our favorite spots like Casey’s Corner (because is it really a Disney trip without corndog nuggs and plastic cheeeeeese?), and The Plaza Restaurant for some affordable table service (and these bottomless shakes when they’re available!)

We’ve Eaten at Every Magic Kingdom Restaurant. These Are the BEST.

EPCOT is known as the food mecca for Disney World because of all of the World Showcase pavilions that contain DOZENS of amazing restaurants that cater to the eats you’d find in those individual countries. 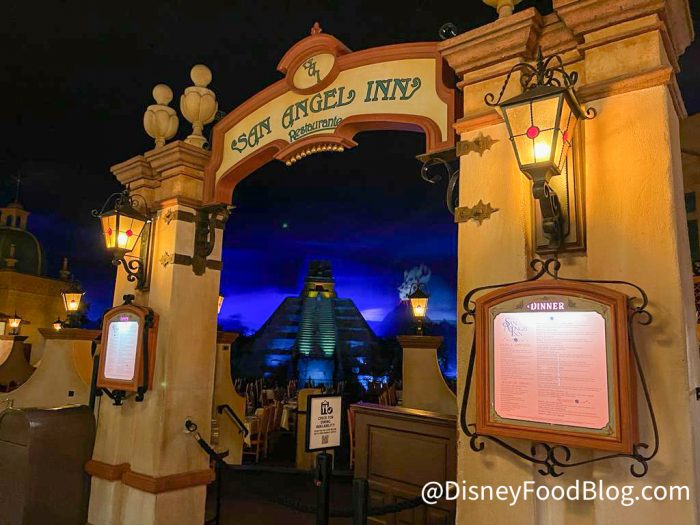 It’s also home to some of our go-to snacks, like School Bread at Kringla Bakeri Og in the Norway Pavilion, macarons over at L’Artisan de Glaces or delicate crepes at La Creperie de Paris in the France Pavilion, or those unique snacks that fill up a whole ROOM in Mitsukoshi at the Japan Pavilion. 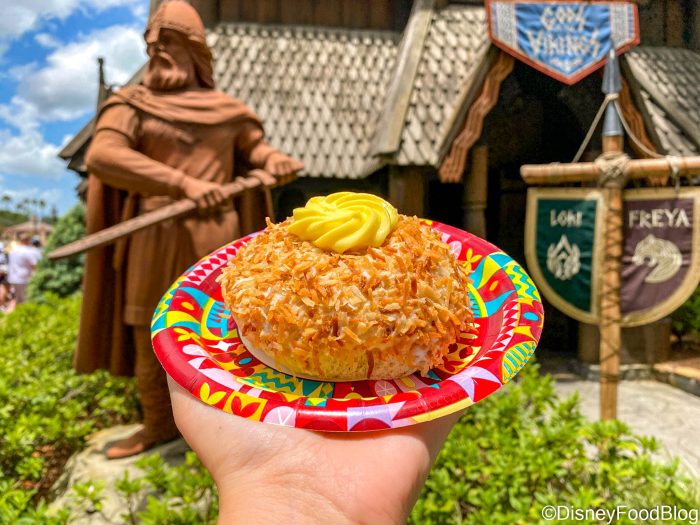 We do love that school bread

EPCOT is also home to possibly our favorite character meal, Garden Grill over in the Land Pavilion — with Mickey Mouse and his friends in their farmer gear, serving up homestyle favorites like roast beef and mac and cheese. And though Magic Kingdom has Be Our Guest and Cinderella’s Royal Table, do those atmospheres compete with being able to eat in space? 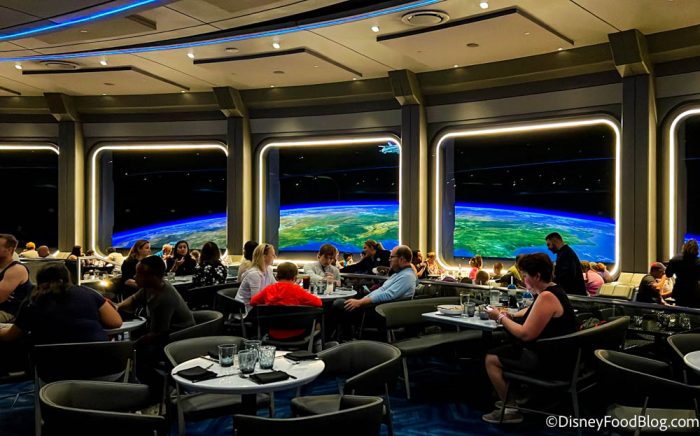 Space 220 in EPCOT not only has some really incredible food, but that experience is also out of this world (literally).

PHOTOS and REVIEW: We Ate EVERYTHING on the Dinner Menu at Space 220 in Disney World!

When it comes to eats, the check mark definitely goes to EPCOT. Regardless of Be Our Guest restaurant (and our beloved corn dog nuggs), EPCOT wins in terms of food. Quality, variety, and quantity. EPCOT ticks those boxes!

We’ve Eaten at Every EPCOT Restaurant. These Are the BEST.

Entertainment at the Magic Kingdom means you’re talking about the Castle stage shows like Let the Magic Begin (at the park opening), and Mickey’s Magical Friendship Faire (throughout the day). 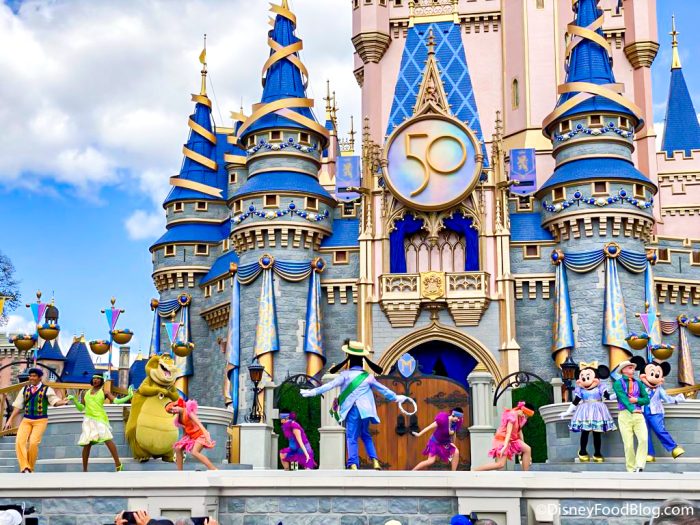 You also can’t forget the iconic entertainment staples like the Dapper Dans on Main Street or the Festival of Fantasy Parade (complete with fire-breathing dragon Maleficent), and the often overlooked Flag Retreat Ceremony at sunset every day. 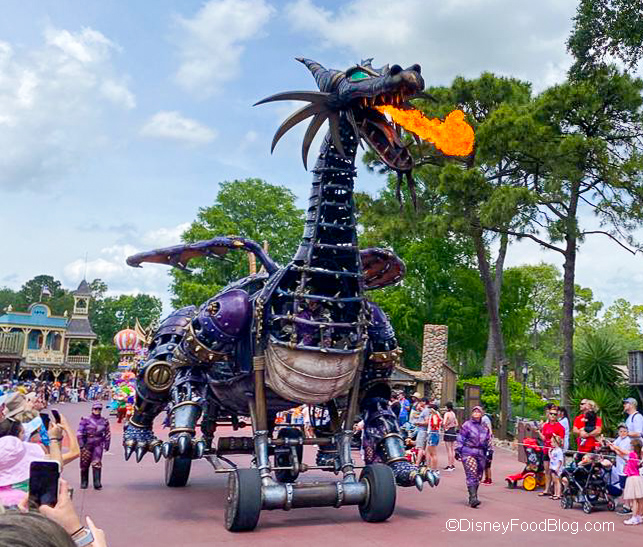 And the newest additions, like cavalcades with classic Disney characters or new friends like Coco and our Pixar pals, featured in the Disney Adventure Friends Cavalcade.

Over in EPCOT, there is entertainment in the individual countries, like Voices of Liberty in the America Pavilion, Mariachi Cobre in the Mexico Pavilion, Sergio the performer in the Italy Pavilion, and others around World Showcase. And if there’s a festival going on, you might find a concert series playing in the America Gardens Theatre. 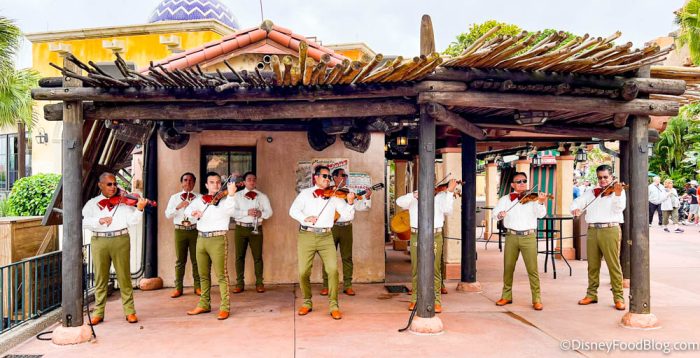 We’ll never pass up a performance from the JAMMitors in World Discovery … but, otherwise, there’s not much else in EPCOT entertainment-wise.

The entertainment in Magic Kingdom is tough to beat. It’s got characters, parades, cavalcades, and stage shows, packing in that entertainment value. 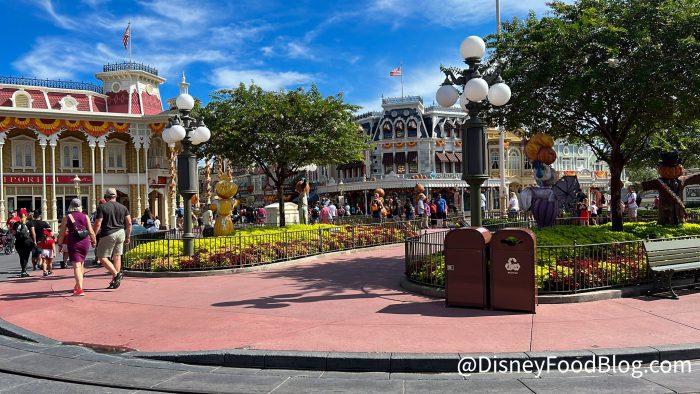 So, when it comes to the general atmosphere, Magic Kingdom has that quintessential Disney-feel

EPCOT’s atmosphere is still magical, but so different. It has all of the amazing countries around World Showcase, which are all so detailed and intricately themed. 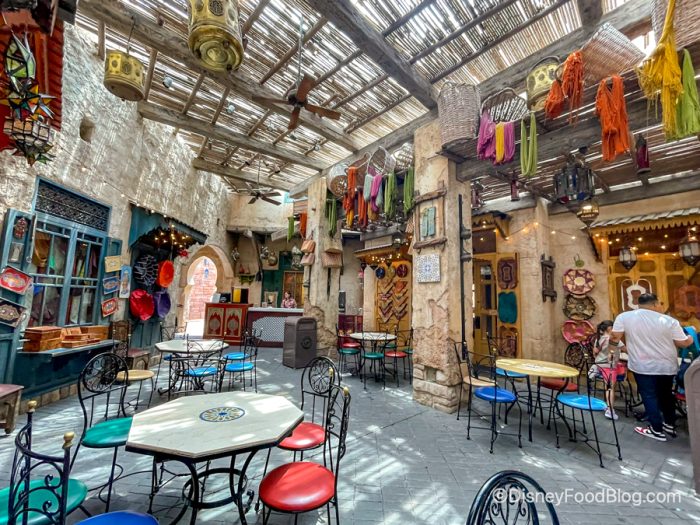 And even though it’s been “Wall-COT” for so long with all of the walls put up for ongoing construction, the new neighborhoods being developed — World Discovery, World Nature, and World Celebration — also add a lot of fun and some quirky nostalgia.

This category is a draw!! It really depends on what you’re expecting and what you want. If you’re only in Disney World for one day and you’re choosing between the Magic Kingdom and EPCOT, a lot of people are going to choose Magic Kingdome because it’s more quintessentially Disney, and it may be what you’re expecting from a Disney visit. But EPCOT is really amazing, and those country pavilions are really so intricately detailed. 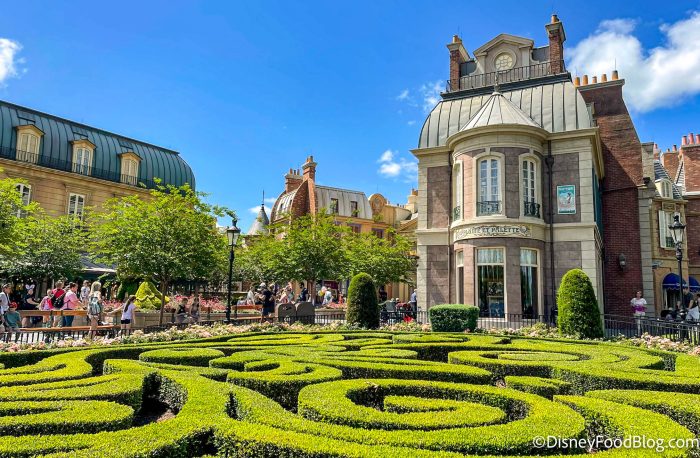 So, there’s no “loser” here, as it really depends on what you’re looking for in your day at Disney.

We Saw the Perfect ✨ Magical Moment ✨ in Disney World Today

Magic Kingdom’s after-dark entertainment is currently the Disney Enchantment fireworks show. It’s filled with heartwarming Disney music, amazing firework displays, and projection shows that light up not just the castle, but images and scenes all along the Main Street, U.S.A storefronts as well, so guests are surrounded by the magic.

Disney Enchantment during the holidays in 2021

And once the sun goes down, Cinderella Castle turns into a Beacon of Magic, and it illuminates the park with sparkling pixie dust.

This show uses fireworks, floating projection screens, choreographed water fountains, and classic Disney songs sung in voices and languages around the world. EPCOT has its own Beacon of Magic, as Spaceship Earth (you know, that giant golf ball at the front of the park) and comes alive with light and music.

Now, this may change when the new Happily Ever After show comes to Magic Kingdom; time will tell. But right now, the Spaceship Earth Beacon of Magic beats EVERYTHING. 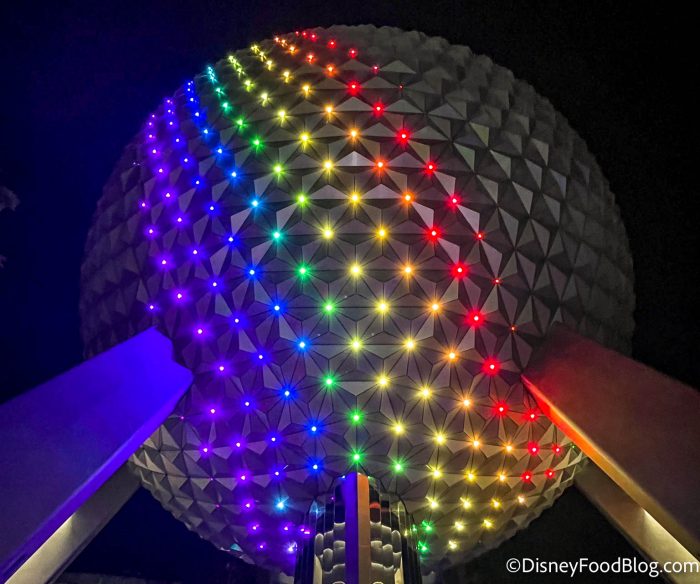 We love ourselves some fireworks. We tear up with Tinker Bell glides across the sky, but we could bask in the glow of Spaceship Earth all night long. It’s magical, it’s mesmerizing, it’s a glowing-light-hug-for-your-eyeballs-and-your-soul.

VIDEO: Spaceship Earth Got a Pocahontas Makeover for the EPCOT Flower & Garden Festival!

Magic Kingdom basically has everything. Every ride you’ve ever heard about in terms of Disney World is most likely at the Magic Kingdom (unless it’s in Pandora, over in Animal Kingdom). Magic Kingdom is home to the Mountain Challenge with: Big Thunder Mountain Railroad, Splash Mountain, and Space Mountain (bonus points if you can fit in Seven Dwarfs Mine Train, since it’s in a mountain, too). 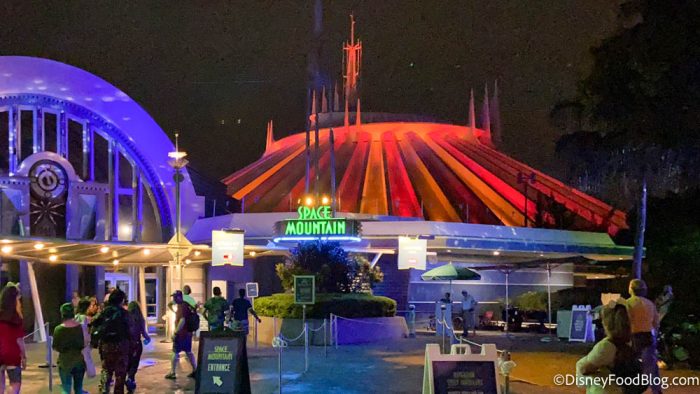 And you have all of the Fantasyland rides, too. Those classic kids’ rides like Dumbo, it’s a small world, and Peter Pan’s Flight. 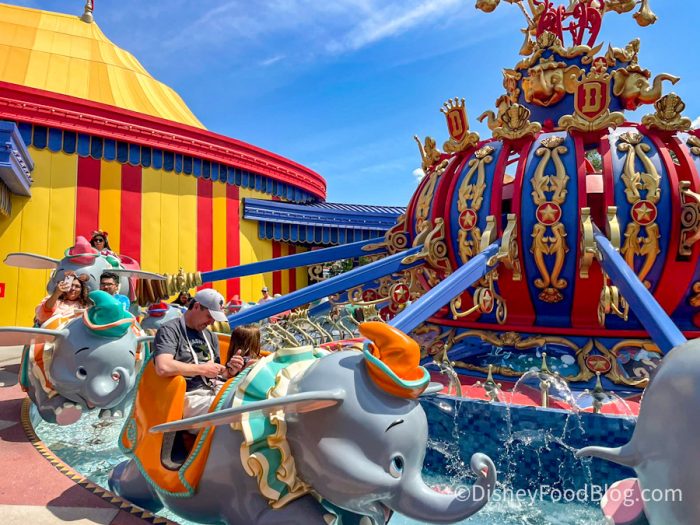 Finally, don’t forget about those iconic rides like Haunted Mansion, Pirates of the Caribbean, and Jungle Cruise. And coming soon, TRON: Lightcyle Run, which has been in construction for what feels like forever and will add some high-anticipated thrills to the Magic Kingdom lineup.

The Five Best Rides at Magic Kingdom (And the Four Worst!)

While Magic Kingdom has MORE attractions, EPCOT has some of the NEWEST attractions. Frozen Ever After, Remy’s Ratatouille Adventure, and Guardians of the Galaxy: Cosmic Rewind have all been added to EPCOT more recently than any ride at Magic Kingdom. 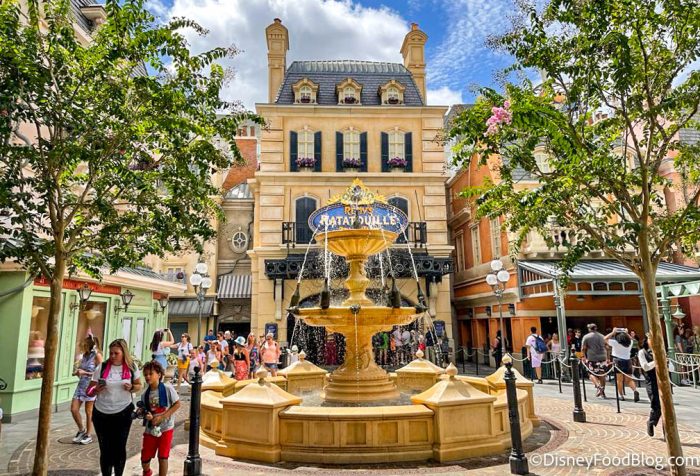 Count them up. There are THREE. Two of them are super kid-friendly — Frozen Ever After and Remy’s Ratatouille Adventure are both great for kiddos and families. Cosmic Rewind is super fun for those tweens and older. 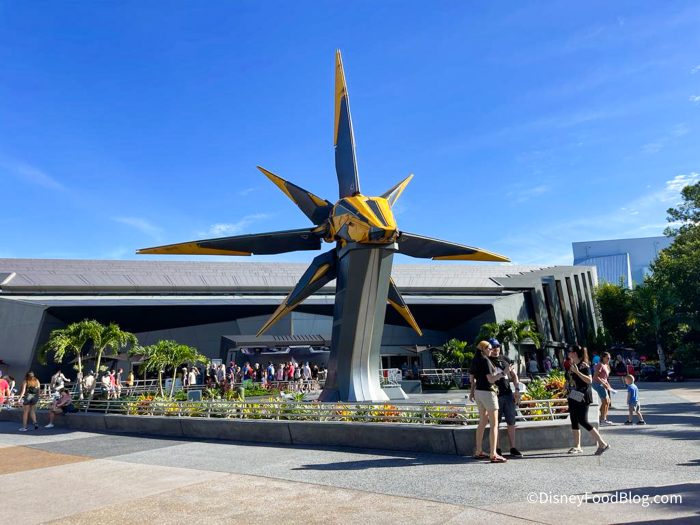 It takes a little finesse and tech-savviness to secure a spot in the Virtual Queue for Cosmic Rewind, but it’s worth the effort.

Do You Know These 20 Rad Disney World Ride Tips?

This is another category that is hard to calibrate. If you want those quintessential Disney rides and experiences, the Magic Kingdom is your pick. If you want to experience some of the newest attractions Disney World has to offer, then EPCOT is your spot. 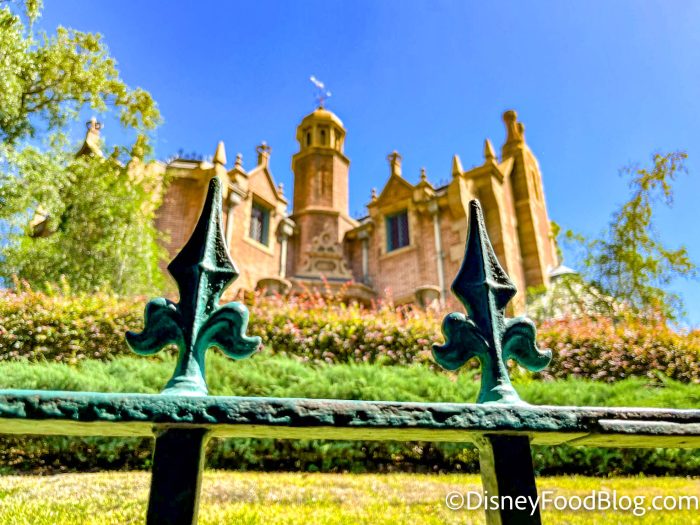 This may change when Tron: Lightcycle Run finally opens. But once again, we’ll have to wait until it opens to see if it tips these scales.

Let’s tally the votes and see how it all broke down.

Our winner is: EPCOT!

Now, Magic Kingdom still has a lot in the works that could shift these points. There’s the return of the reimagined Happily Ever After fireworks show and the opening of TRON that might give Magic Kingdom the edge in the Attractions category, and unseat EPCOT from the Night Time Show throne.

The bottom line is, no matter which park you choose, you’ll have a blast! Stay tuned to DFB for all of the best tips and news for making the most out of your Disney vacation, whether you’re visiting one park or all four!

The WORST Disney World Planning Advice, According to YOU.

What do you think? Do you have a favorite between EPCOT and Magic Kingdom? Leave your comments below!

« You Have to See the Crowds in Disney World Today to Believe Them
PHOTOS: An Iconic Gingerbread Display Is Under Construction at Disney World »