Disney+ took the streaming world by storm when it launched back in 2019.

We’ve seen a ton of successful originals, like The Mandalorian, Loki, Obi-Wan Kenobi, and even movie launches like Turning Red and Hocus Pocus. The streaming service was introduced with pretty reasonable pricing, but since then, has seen some price increases. We also found out that ads would soon be coming to Disney+, and the day is finally here — Disney+ has launching their service with ads.

Disney+ just launched ads on the streaming service, meaning pricing has changed. There is now Disney+ Basic and Disney+ Premium. Basic comes with ads for $7.99 a month.

Premium has no ads and is $10.99 a month. You can also pay for premium on a yearly basis at $109.99 per year. Premium includes unlimited downloads, and Groupwatch and Dolby Atmos are also only included on Premium.

There are also some bundle options that include Hulu and ESPN+. You can take a look at those options below: 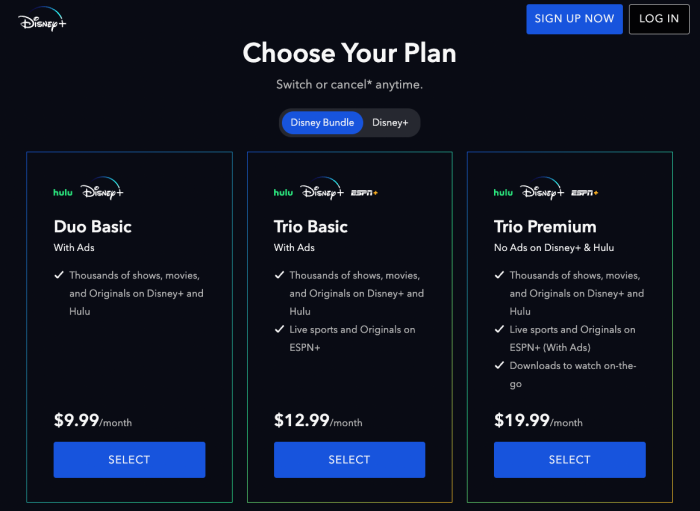 It’s also important to note that if you already have Disney+, you will be automatically enrolled into Disney+ Premium. You need to physically switch to Disney+ Basic if you don’t want the price increase and benefits of Premium.

There are more than 100 advertisers across all major categories now, including things like Mercedes, Starbucks, Google, Taco Bell, Verizon, and more.

For more on Disney+ and streaming, check out the 32(!!) remakes, reboots, and sequel movies in the works at Disney right now, everything coming to Disney+ this December, and if you should cancel cable and get Hulu + Live TV instead.

Why You’ll NEVER See These Disney Movies on Disney+

Will you be switching to Disney+ Basic? Tell us in the comments.