In November, Buena Vista Street at Disney California Adventure Park reopened as an extension of Downtown Disney and we were reunited with some of our favorite park snacks!

Just a few days ago, however, Southern California was placed under a regional stay-at-home order, causing many of the restaurants in Downtown Disney to close or only be open for take-out. And now, we’ve spotted another update for Disneyland Resort — Downtown Disney will NOT be open at all on Christmas Day.

Earlier today, we noticed that the Disneyland App was not showing any hours for Downtown Disney on Christmas Day, December 25th, and instead was saying that Downtown Disney would be closed.

So, we chatted with a Disneyland Cast Member and they told us that Downtown Disney District will be closed on Christmas Day. 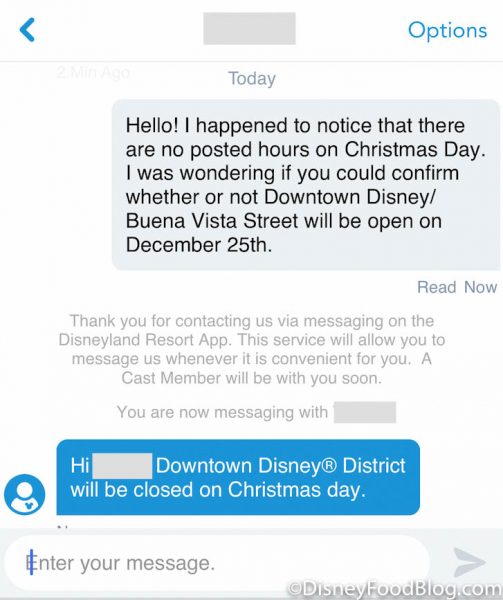 So, it seems the entire Downtown Disney District, including its extension into Buena Vista Street, will be closed on Christmas Day this year. If you were planning to go to the shopping district for some last minute gifts, be aware that you won’t be able to stop by on Christmas Day.

These hours are subject to change in the future, so we’ll be on the lookout for any updates and let you know what we see.

Click here to see a FULL LIST of the open and closed Disneyland Resort locations due to California’s regional stay-at-home order.

Will you be going to Downtown Disney soon? Let us know in the comments!

« Foodies! The New Loungefly in Disney World and Online Is COVERED in Our Favorite Snacks!
Vivoli il Gelato in Disney Springs is Making ‘Mistletoe Magic’ with a New Gelato Sundae! »