We’ve been having a blast playing Disney-themed brackets over the past year, but we’ve got an EXTRA special one going on right now.

What makes it so special? You made this Disney smackdown! It’s the DFB Best Spot in Disney World Bracket and it’s built from submissions from YOU. That’s right, every item on this bracket is a spot that means a LOT to one of our readers, and we’re so excited to find out which one is the best of the best (even if they’re all AMAZING!). 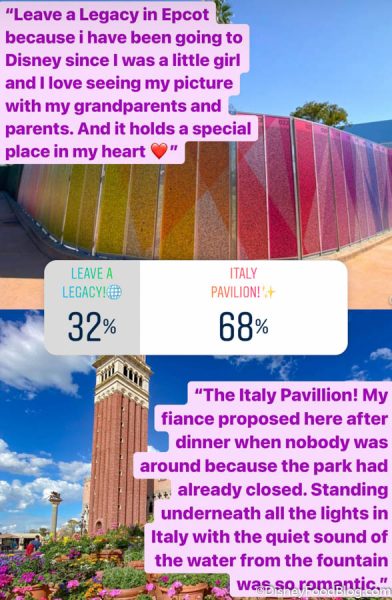 Some guests love toting a Dole Whip near Aloha Isle, but this spot couldn’t quite stand up to the pure magic and beauty of Cinderella Castle! Cindy’s place won out as a more magical spot with a whopping 85% of the vote! 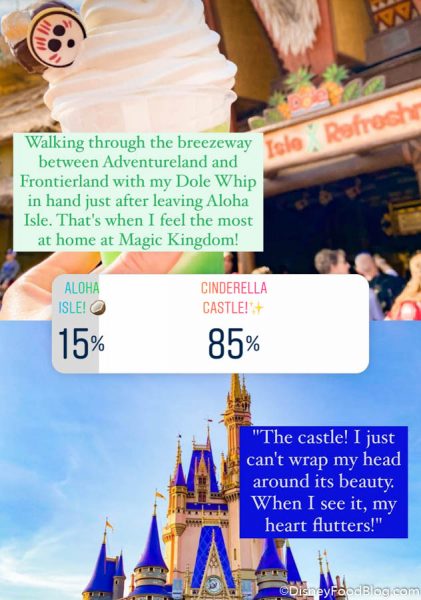 Another MAJOR blowout was the result when Main Street, U.S.A., a happy place for many, beat out the wonderful memories of trying on Mickey ears at The Chapeau. 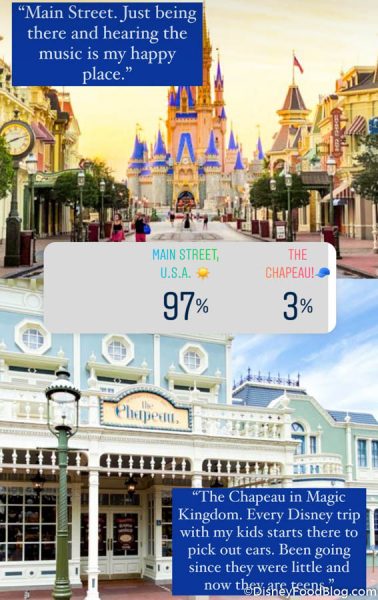 We’ve got another EPCOT mash-up! The spectacular sight of walking into World Showcase trumped the wonky and memorable troll statue inside The Fjording. 87% of you have a special place in your heart for EPCOT’s worldly pavilions! 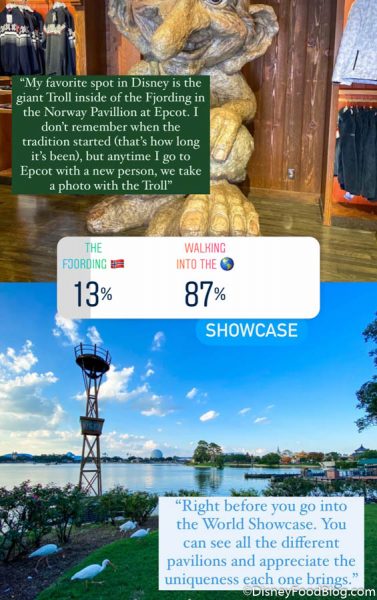 Some of you sent in resort hotel spots as special to you and we couldn’t agree more! The delightful beaches and hammocks of Disney’s Polynesian Village Resort left the peaceful seating on Disney’s BoardWalk behind. 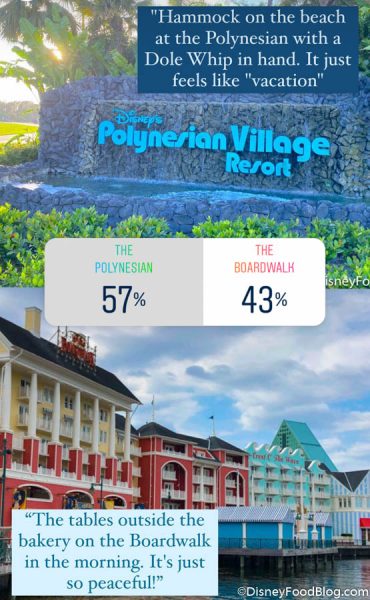 Looking for a spot to imbibe? We compared a serene break at Nomad Lounge in Disney’s Animal Kingdom to the relaxing escape of La Cava del Tequila in EPCOT. This one was CLOSE, but Nomad Lounge barely took the win with 52%. 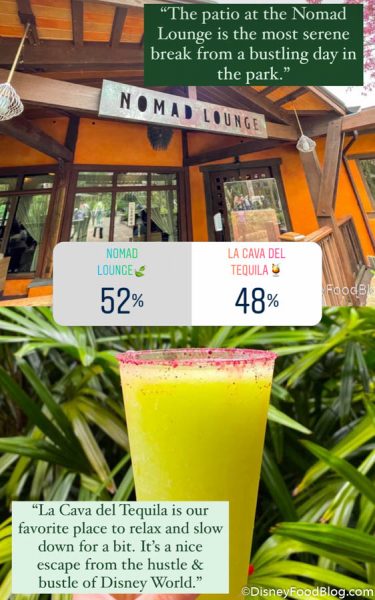 In Disney World, pretty much anywhere can hold special memories — even transportation! You picked the magic of the Disney World monorail over the cool views of the Skyliner at night. 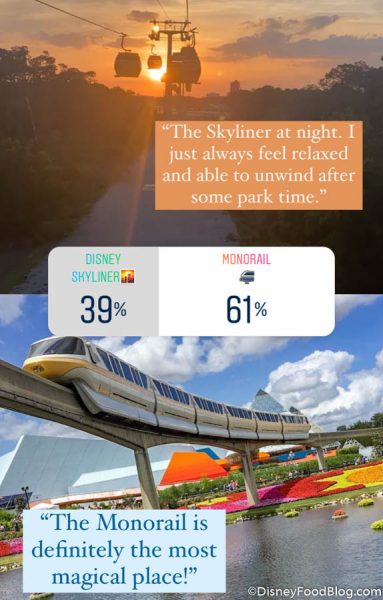 The joy and wonder of watching the pianist and hanging out in the lobby at Disney’s Grand Floridian Resort won’t be making it to the next round. Why? Plenty of folks voted for the magic of relaxing in a Disney World Resort hotel room! 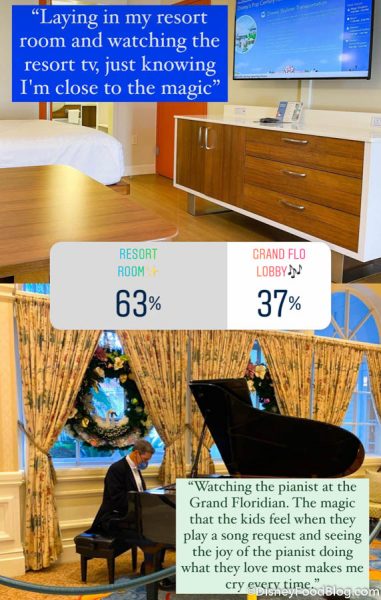 We’re popping back into Magic Kingdom for our next mash-up. Pirates of the Caribbean took the cake as a wondrous attraction when pitted against the Tomorrowland Transit Authority PeopleMover — but don’t think that means we miss it any less! 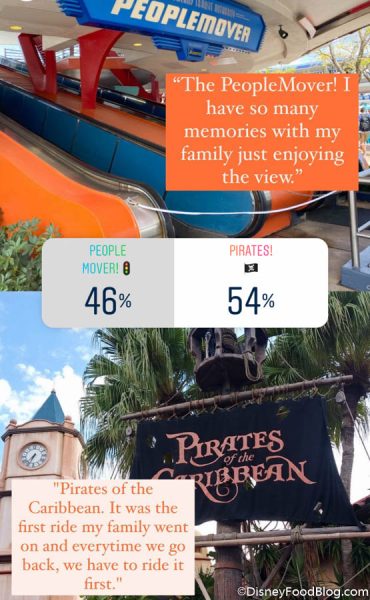 EPCOT boat rides can be seriously magical places. Still, Living with the Land holds more special memories for our readers than Gran Fiesta Tour does. 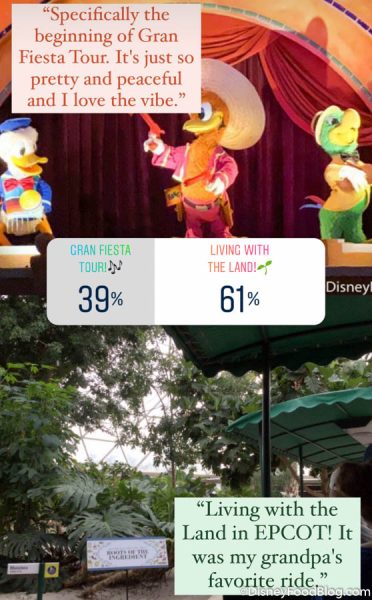 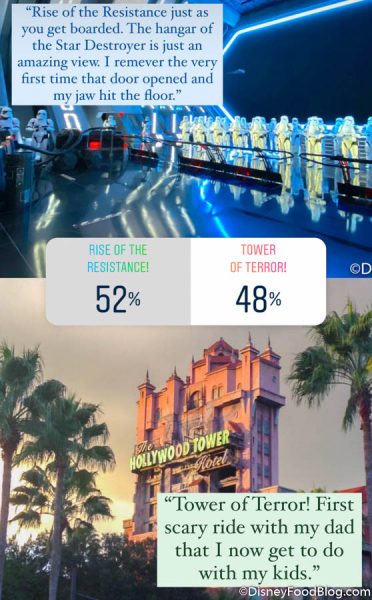 Some iconic EPCOT attractions gave our voters quite the conundrum too, but in the end, Spaceship Earth was voted as the better spot than Test Track. 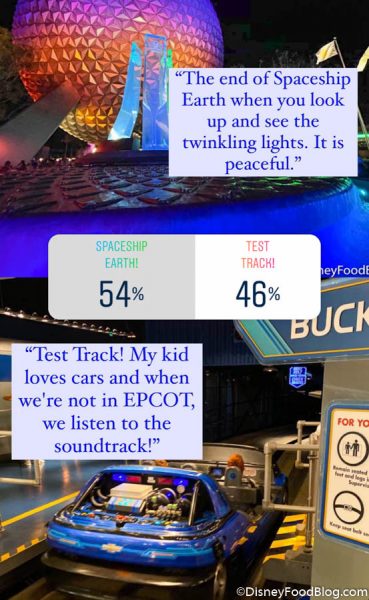 Let’s give some little locations some love over in Magic Kingdom! Which do you think won between the Wishing Well near Cinderella Castle and the dining room at The Crystal Palace? It was the Wishing Well! 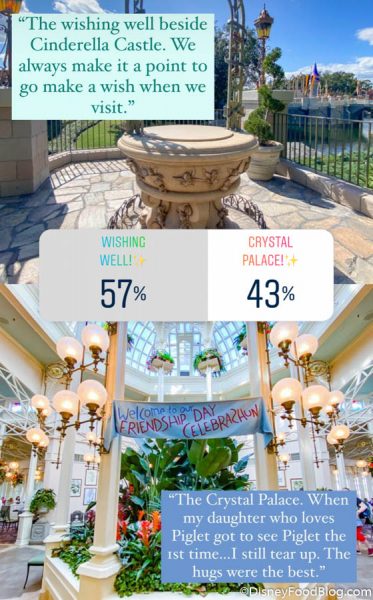 BACK over in Hollywood Studios, we had to see whether you think it’s more special to stand in awe of the Millennium Falcon in Star Wars: Galaxy’s Edge or to stroll down Sunset Boulevard. Sunset Boulevard took the win! 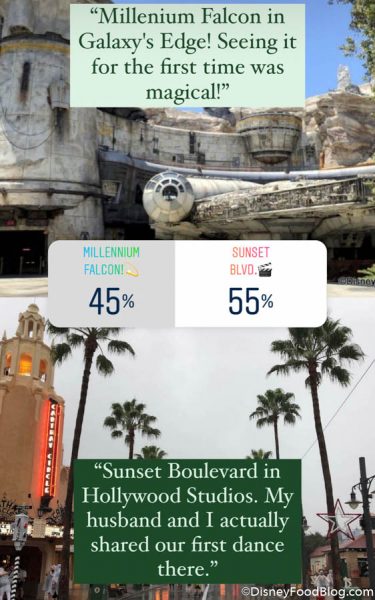 It turns out you love grabbing a seat near the Tree of Life in Disney’s Animal Kingdom more than you love to grab a snack at Harambe Market. Hey, it’s okay to love both! 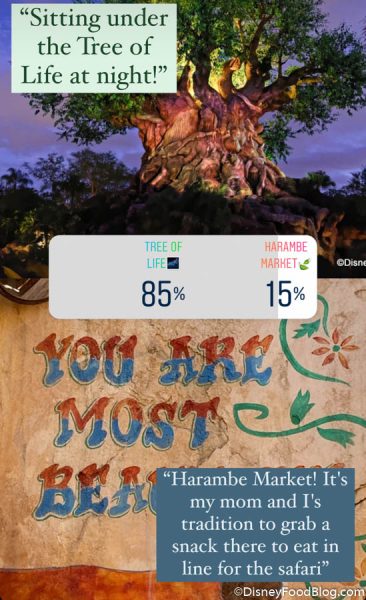 And our final match-up was a smackdown for most wonderful between Rose and Crown Pub and Dining Room and the France Pavilion in EPCOT. With 70% of the vote, France took the gâteau. 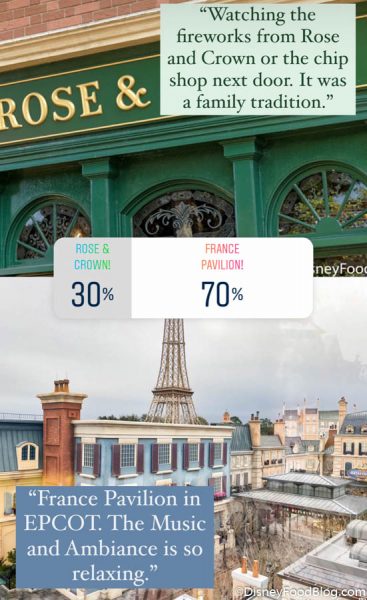 Wow, this just might be the hardest bracket yet! How are we expected to pick the ultimate winner of all of these special and magical Disney spots? If you want to vote in the next round, head on over to our Instagram and keep an eye on those stories! Round 2 voting is happening SOON.

Head to our Instagram to cast your vote in the DFB Best Spot in Disney World Bracket!

What spot do you think should win? Tell us in the comments!

« NEWS: France To Enter Third National Lockdown
Missed Disneyland’s Mint Julep As Much as We Did? Seasonal Flavors Are Coming! »