Hello there! Or, as Chewbacca would say, “Rrrrrrr-ghghghgh!” We’re celebrating all things Star Wars on this May the Fourth holiday, which for us means lots of themed treats and snacks. Today, we’re heading to a Disneyland hotel to try out a new offering there. 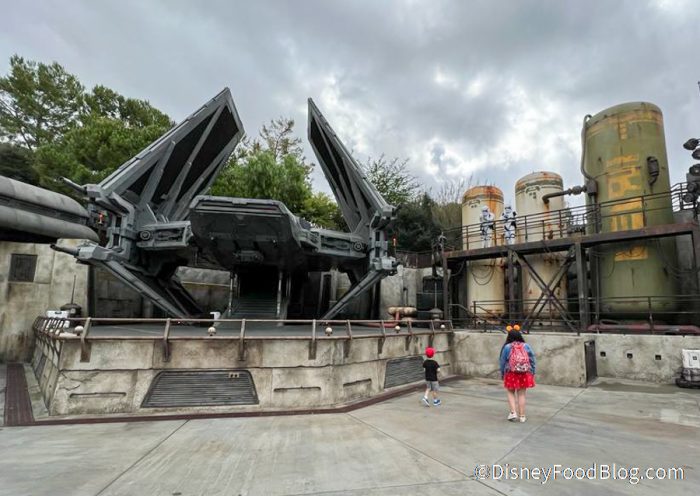 Happy May the Fourth

Before you see the name of this treat and come at us in the comments, we’re acknowledging now that it doesn’t SOUND new at all. In fact, it has the exact same name as one of our FAVORITE cookies in Disney’s Hollywood Studios in Disney World! But the one we’re about to try is actually very different — so how does the West Coast version measure up? We’re about to find out.

One of the treats that we always recommend in Disney World is the Wookie Cookie, which can be found at Backlot Express in Hollywood Studios. This treat is 2 oatmeal cookies sandwiched together with vanilla cream filling, topped with a milk chocolate version of Chewbacca’s bandolier. 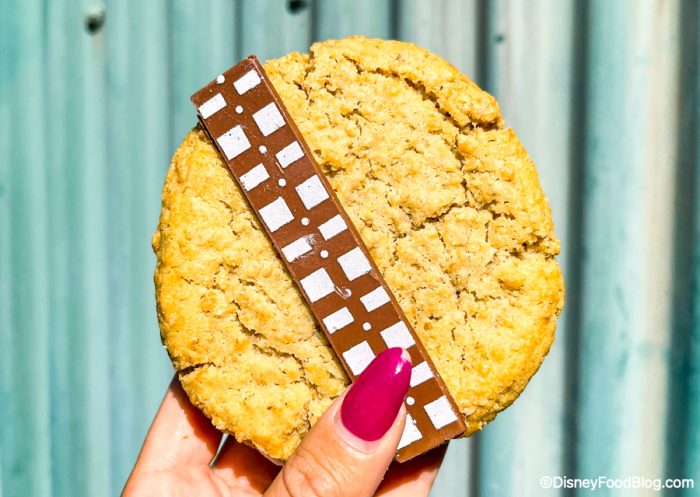 We LOVE this cookie, which first appeared in Disney World in 2019 and made a comeback in 2021. 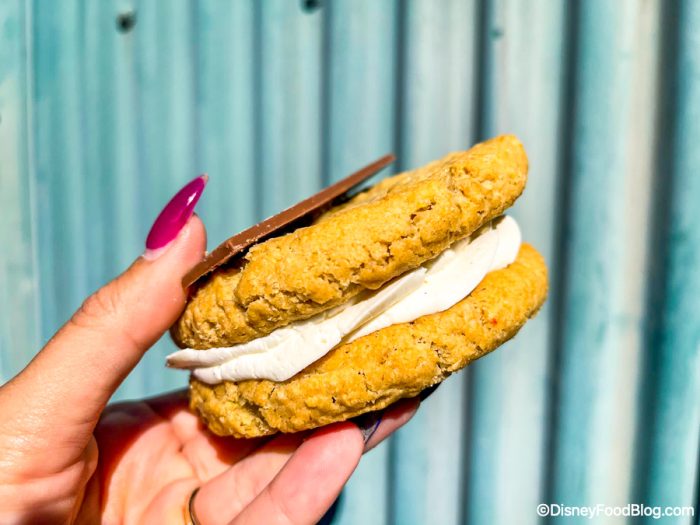 And now there’s a new version of it in Disneyland! At the Seasonal Cart in the lobby of Disney’s Grand Californian Resort, you can find the new Wookie Cookie. 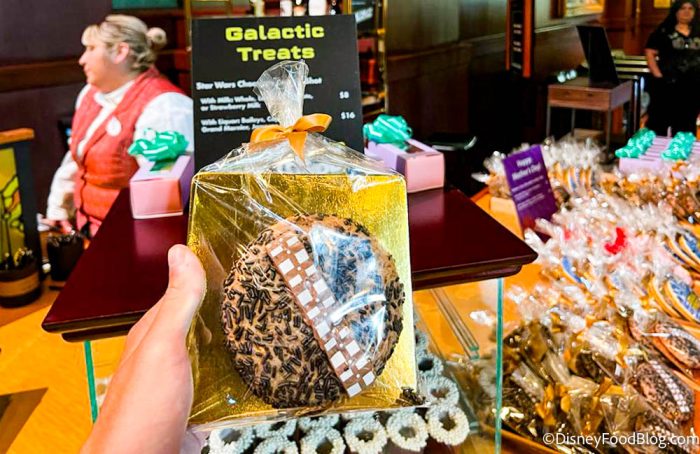 So what’s the difference between the 2? We love the Disney World Wookie Cookie for its simplicity — delicious oatmeal cookies with plain (and sweet) vanilla frosting. But the Disneyland Wookie Cookie is a chocolate-lovers DREAM. 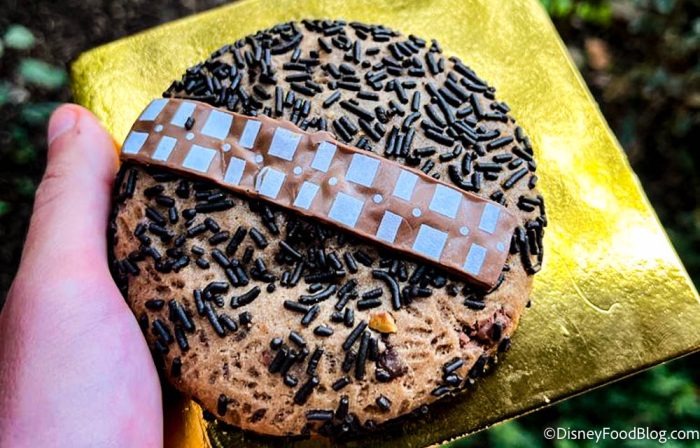 This treat is actually 2 chocolate cookies (with extra chocolate chips inside and chocolate sprinkles on top) sandwiched together with a Nutella-like frosting. That filling has a hint of hazelnut, but it mostly just adds more chocolate flavor to the treat! And there’s a chocolate bandolier on top of this cookie, like the Disney World one. 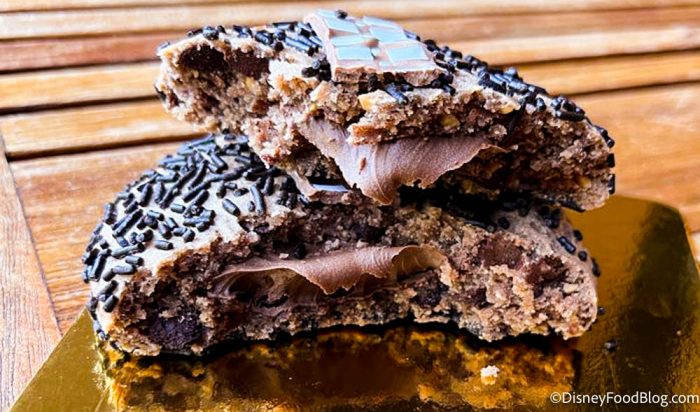 There was a hint of coconut flavor in the cookies, but really it was overpowered by all the chocolate. See what we mean by a chocolate-lover’s dream? You can get it for $9. But which Wookie Cookie reigns supreme? Really, it depends on your own preferences (and we know that’s a cop-out answer). We probably prefer the Disney World original because simple flavors done right are always a win in our book. But if you can’t get enough chocolate, we think you’ll LOVE the Disneyland one! 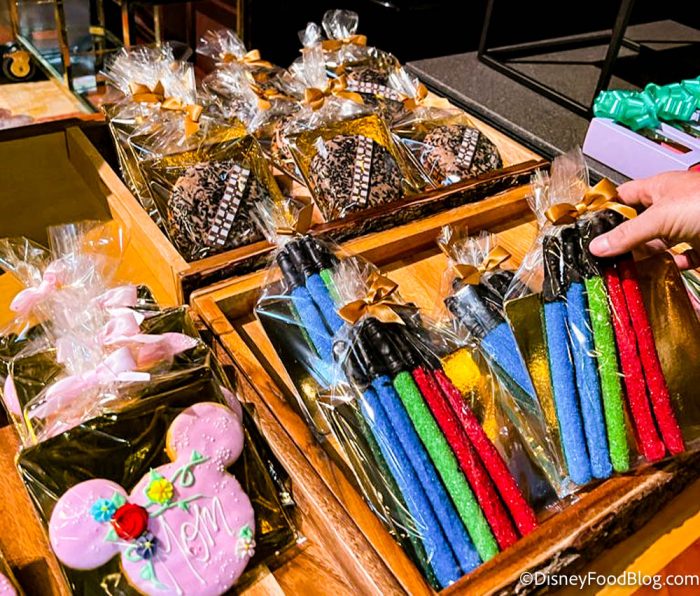 If you head in to try this treat, don’t forget to check out all the other seasonal treats at the Grand Californian, too. There are more Star Wars treats, or you can check out the Mother’s Day confections. Keep following DFB for more reviews on the newest treats in Disney World!

Click here for a FULL LIST of Star Wars eats coming to Disney World and Disneyland for May the 4th.

Which Wookie Cookie sounds better to you? Let us know in the comments.

« PHOTOS: We Drank Out of a Lightbulb in Disneyland
This Hotel Room Near Disney World Is Bigger Than A House…And Costs More Than One Too »