Here at DFB, we love a classic Disney treat, but we also can’t resist crafting up our own specialties from some of our favorite Disney snacks. 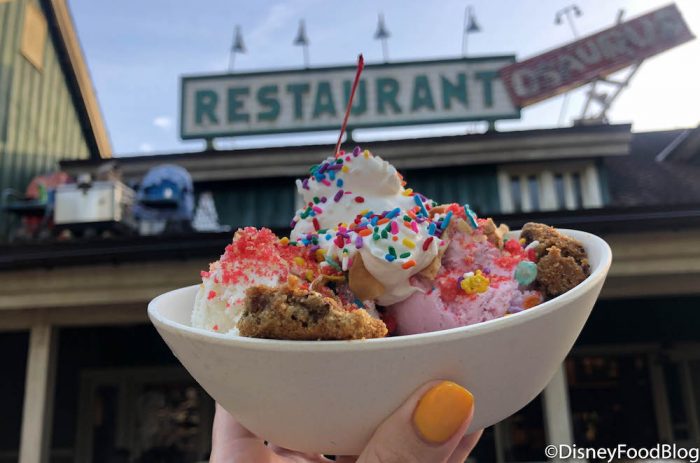 END_OF_DOCUMENT_TOKEN_TO_BE_REPLACED

Disney’s just landed a bombshell on us! You know those awesome dining packages at Disney California Adventure where you can enjoy a special Disney feast PLUS receive reserved viewing for the nighttime spectacular show, World of Color?

Well, they’ve just added another restaurant to the list! That’s right friends, in addition to the 3-course prix fixe meal being served at Carthay Circle and Wine Country Trattoria (which you can read our review of here!), there’s now an all-you-can-eat option at this POPULAR Disneyland Resort hotpot!

END_OF_DOCUMENT_TOKEN_TO_BE_REPLACED The Oogie Boogie BASH! That’s right! Our pal Mr.Oogie Boogie did such a good job MCing his first Halloween Party at Disney California Adventure that his contract’s been renewed! Or should we say, re-booed!

END_OF_DOCUMENT_TOKEN_TO_BE_REPLACED And get this…you can book these FastPasses straight from your phone!

END_OF_DOCUMENT_TOKEN_TO_BE_REPLACED

Today we’re taking you to Disneyland Resort to say “Welcome back!” to the World of Color nighttime spectacular in Disney California Adventure! And we’re starting to see those Disney World Skyliner cables being tested with REAL gondolas! You can also see a video of these in progress here on our instagram channel! END_OF_DOCUMENT_TOKEN_TO_BE_REPLACED

The highly anticipated return of the World of Color nighttime spectacular to Disney California Adventure is happening soon! As of the original press time for this post, the official return date from the show’s refurbishment had not yet been confirmed on the Disneyland website; however, this post has been updated as we have just received word that the first day of World of Color soft openings will be February 22nd. The soft openings will take place through February 28th, with the official reopening set for March 1st.
END_OF_DOCUMENT_TOKEN_TO_BE_REPLACED

END_OF_DOCUMENT_TOKEN_TO_BE_REPLACED

Hooray! Dates have been announced for the return of Festival of Holidays in Disney California Adventure! From November 10, 2017 through January 7, 2018 — as part of the Holidays at Disneyland Resort — the Festival of Holidays celebrates the season with special entertainment, music, and FOOD! Last year, that food came by way of Fourteen Festival Marketplace Booths, featuring everything from global bites to comfort foods to traditional holiday goodies. And today Disney announced that the Festive Foods Marketplace will return for its second year. END_OF_DOCUMENT_TOKEN_TO_BE_REPLACED

This past March, the Disneyland Resort introduced the World of Color Dessert Party.  My family and I had the pleasure of attending recently, and what a special treat it was!  I’m always up for a Disney Dessert Party. I’ve done the Fanstasmic Dessert Party at Disneyland (currently on hiatus due to construction) and also a handful of different dessert parties at Walt Disney World. I’m excited to say that the World of Color Dessert Party both met and exceeded my expectations!  The dessert party starts one hour prior to World of Color show time.  Reservations must be made in advance either online or by calling Disney Dining; the dessert parties are nightly.