Did you happen to snag one of the Pizza Planet Spirit Jerseys that hit the scene late last year? 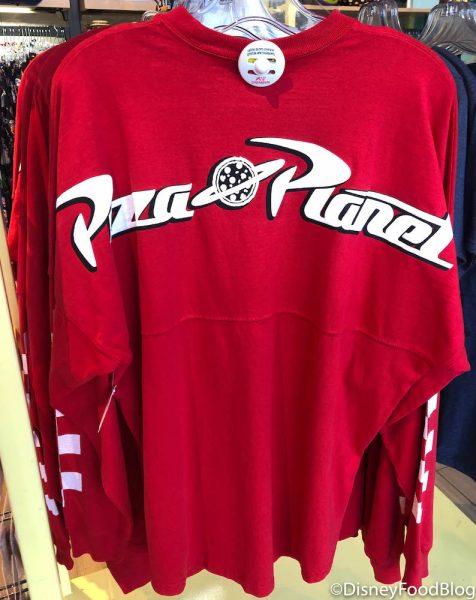 If so, then you may be looking for just the accessory to pair with it. And we think we’ve got you (and your head!) covered with this new Pizza Planet cap! END_OF_DOCUMENT_TOKEN_TO_BE_REPLACED

Are you a Disney Pin Collector or Trader? Personally speaking, I’m really not. But I’ve always had an appreciation for the teeny works of art. So every now and then I take a look to check them out, which is how I found myself in Disney’s Pin Traders in the Marketplace of Disney Springs (located directly across from Earl of Sandwich). END_OF_DOCUMENT_TOKEN_TO_BE_REPLACED Are you with me? Let’s go! END_OF_DOCUMENT_TOKEN_TO_BE_REPLACED

is now OPEN for business in Disney’s Hollywood Studios!

This Counter Service eatery served its last pizza pie as Toy Story Pizza Planet in January of this year.

Throughout most of 2016 a HUGE makeover has been taking place, transforming this space that was once filled with visions of Little Green Men and arcade games into an establishment owned-and-operated by none other than Rizzo the Rat of Muppets fame!

Located in what is now known as the Muppets Courtyard section of the park, PizzeRizzo is at long last ready to welcome you and yours to the (literal) party! So join us for our very first visit to The Famous Original PizzeRizzo!! Over the past several months, we’ve been able to spy plenty of outdoor details of PizzeRizzo as the transformation has taken place. END_OF_DOCUMENT_TOKEN_TO_BE_REPLACED

Happy Sunday and happy long weekend! As we mark a time of remembrance this Memorial Day weekend, we also hope you’re planning some celebrations with family and friends as summer is officially starting. It was another exciting week for foodies at Walt Disney World as we celebrated the opening of AristoCrepes, Tiffins, the Nomad Lounge, and STK Orlando ! We had a chance to attend the preview night at STK and we’ll have a full review of our recent dinner there very soon!

There are just a couple more days left to enter new sweepstakes from Joffrey’s Coffee & Tea? You can win a trip to the Walt Disney World Resort as part of the 2nd Annual Magic in Your Mug Sweepstakes!

And finally, don’t forget about our Memorial Day sale — 40% off all items at the DFB Store!

END_OF_DOCUMENT_TOKEN_TO_BE_REPLACED A short time later, a few clues began to lend weight to rumors that the quick service spot might reopen with a Muppets theme. First, there was the arrival of construction walls around the closed restaurant with more than a subtle hint of that classic Muppets humor. END_OF_DOCUMENT_TOKEN_TO_BE_REPLACED

It’s time for another Trip Around the World to check out all the latest eats and happenings… and maaaaaybe a couple of construction walls, while we’re at it ;). Because while April showers might bring May flowers, this month is also bringing LOTS of changes to the Disney World parks!

And nowhere else is that more true than…

It’s already been over six months since it was announced that MAJOR changes are on the way to Disney’s Hollywood Studios with the construction of Toy Story and Star Wars Lands.

Of course, it will be quite some time before those Lands are realized, but early April brought some of the first physical signs of change as the Streets of America section of the park (including eateries such as Studio Catering Co., High Octane Refreshments, Herbie’s Drive-In and the Pretzel Garden) was officially closed to make way for construction. END_OF_DOCUMENT_TOKEN_TO_BE_REPLACED Well, it’s now part of the newly renamed Muppets Courtyard! The new name of this area of the park is revealed in the updated Guide Map for Disney’s Hollywood Studios (it’s listed on the bottom right of the shot below). END_OF_DOCUMENT_TOKEN_TO_BE_REPLACED

Okay, let’s face it: construction walls covering up refurbishment areas in Disney World are something we’re pretty used to seeing. They cover everything from the upcoming Frozen Ever After attraction in the former home of Epcot’s Maelstrom to Avatar Land in Animal Kingdom to the ongoing transformation of Disney Springs, and then some. Walls outside of Planet Hollywood’s refurbishment in Disney Springs

END_OF_DOCUMENT_TOKEN_TO_BE_REPLACED

Happy New Year! We hope you had a great time ringing in 2016! We just know this year is going to be the best one yet! Last year was full of Disney food news and we saw the opening of several great new restaurants at Disney Springs and the Magic Kingdom.

But this year is going to be even more amazing with the opening of more new spots at Disney Springs including STK Orlando, The Edison, and Blaze Fast Fire’d Pizza!