We’re back to check in on all of the construction projects taking place in Disney World right now! 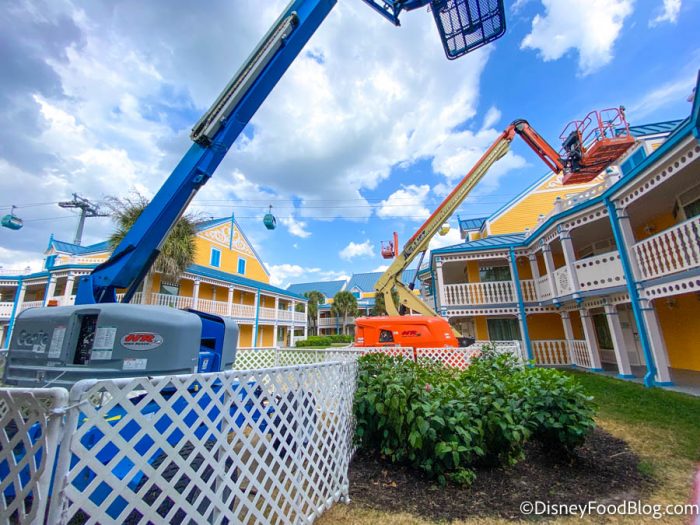 We’re taking a look at big and small updates that we’ve noticed during our trips to Disney World’s parks and resorts this week. Let’s check them out!

We’ve been tracking the changes at the stage in front of Cinderella Castle for a while. Now, it looks like it’s finally nearing completion. 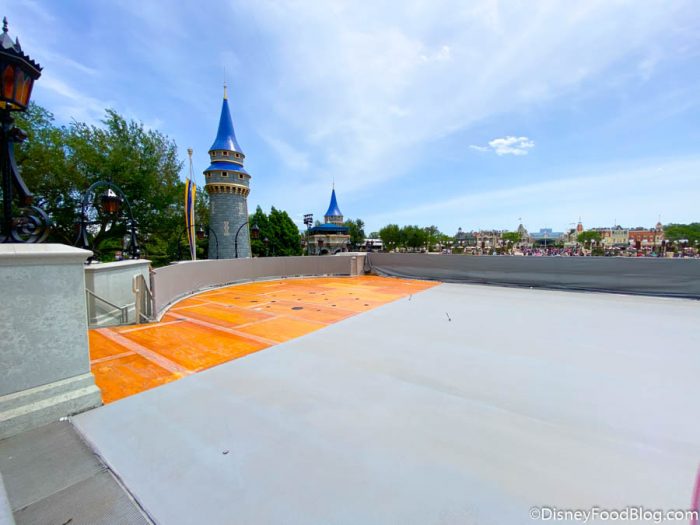 The recently installed wooden panels are now being covered with gray surfacing. 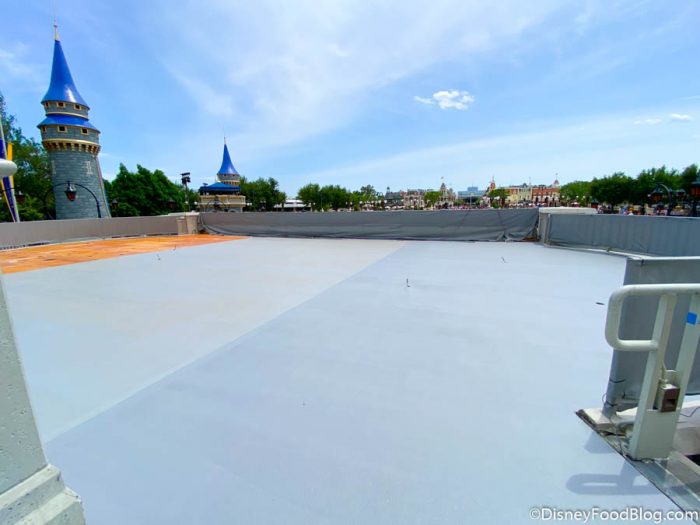 Maybe by our next visit to Magic Kingdom, the whole stage will be covered!

Cool Ship in Tomorrowland has been surrounded by short construction walls for over a week now. This week, we noticed it was getting a refreshed look! 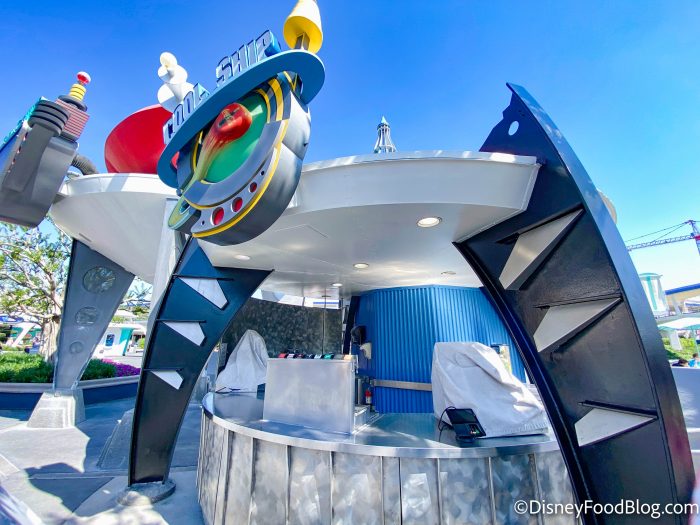 Fresh paint has been added to the exterior of the building, creating a bright layer of color! 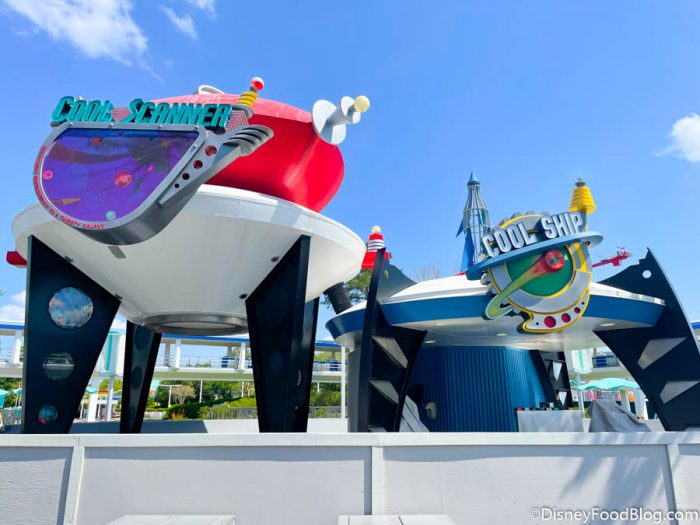 Could this paint job mean Cool Ship will finally be reopening soon? We’ll be keeping an eye out for any updates.

Changes have started over at Jungle Cruise in Adventureland as the ride is reimagined to incorporate new characters and storylines. The iconic Trader Sam animatronic has been removed and some netting is now where he once stood. 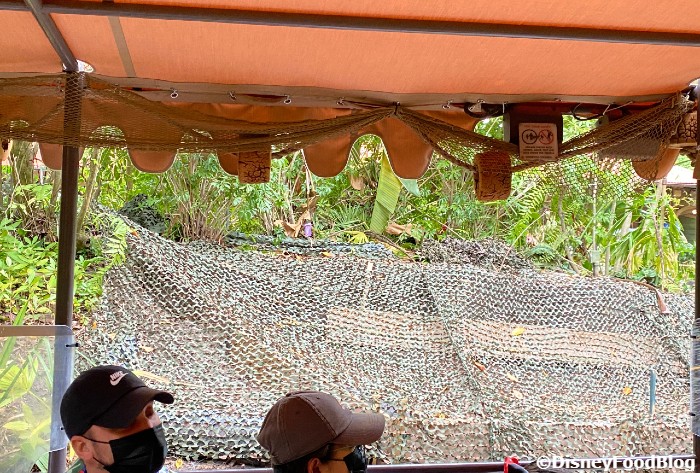 Additionally, the gigantic pole that was stacked with people climbing to get away from rhinos is now gone as well. 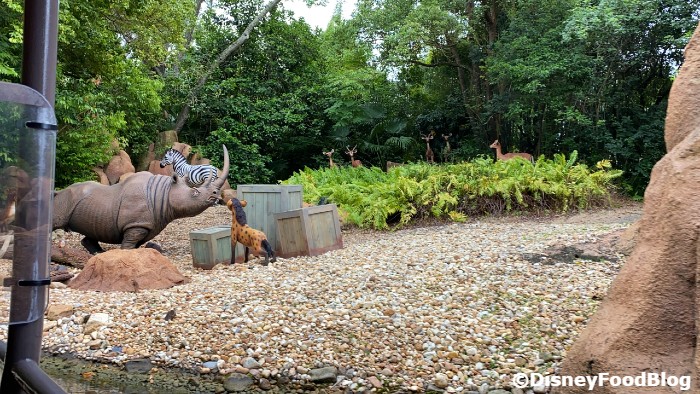 The ride will remain open throughout the duration of the changes so we’ll be sharing all the latest!

Preparations for EPCOT’s new show Harmonious have brought massive metal barges to the middle of World Showcase Lagoon. And we’re not gonna lie…they’re not so pretty. As we await more information about the debut of the show, we noticed some work being done on the show’s centerpiece. 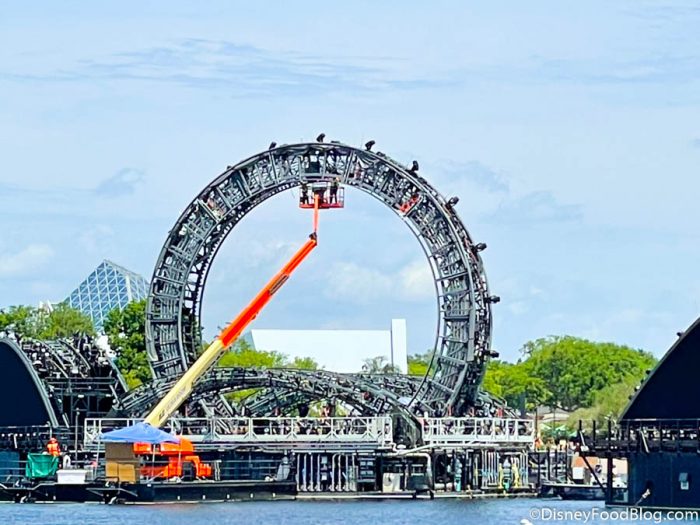 When will we finally see Harmonious?

Later in the week, we saw the addition of cages next to one of the barges. Perhaps for fireworks? 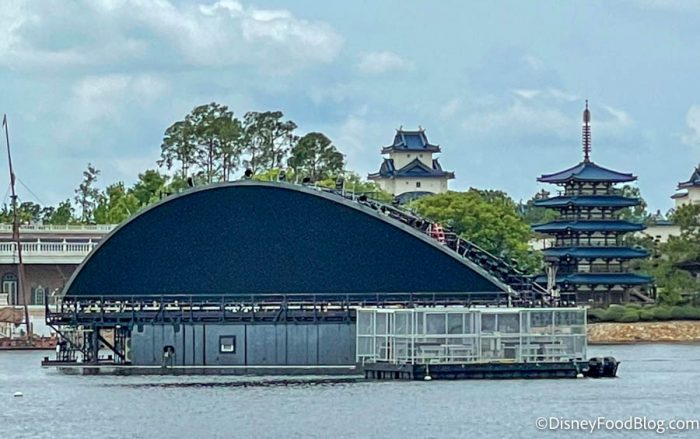 We’re seriously wondering when we’re going to be able to see some nighttime action over on World Showcase Lagoon. Come on, Disney — give us a date!

Also in the realm of new attractions without opening dates is Guardians of the Galaxy: Cosmic Rewind. Construction progress of the ride’s exterior has ramped up, but we’re still waiting to find out when we’ll be able to zip through the galaxy alongside Star-Lord and Groot. 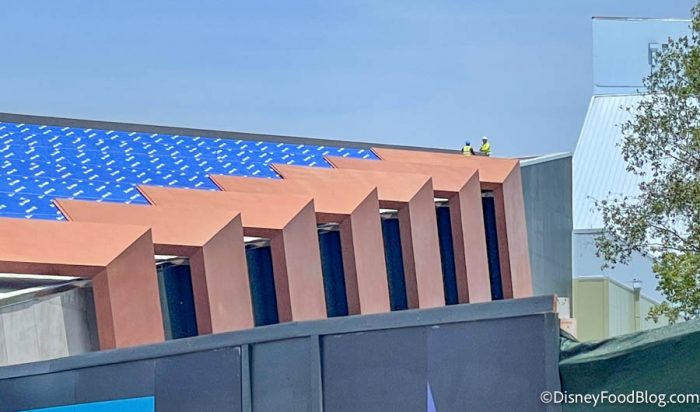 We recently noticed a filed permit for the area outside of the upcoming attraction, so there may be some new developments on the way.

Not too long ago, a mystery wall was in place in the Morocco Pavilion. We weren’t sure what was going on behind it, and now the truth has been revealed! *Drum roll pleaseeeee* 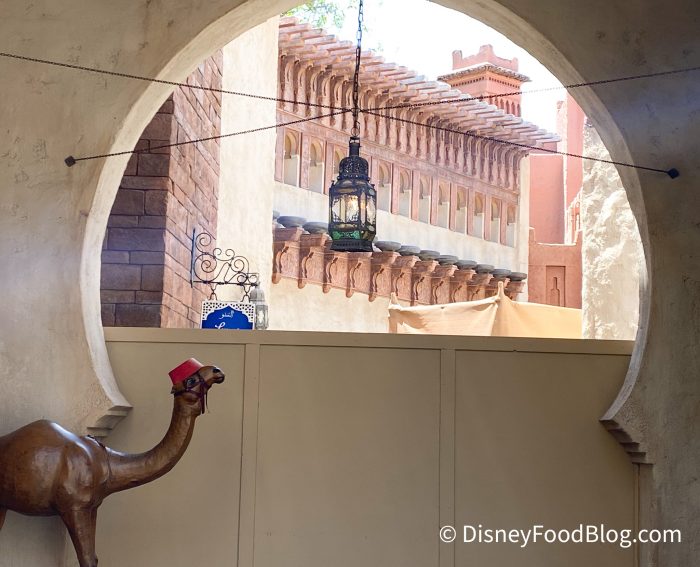 Construction walls up in the Morocco Pavilion

There’s now, a BRAND. NEW…door? Yeah. There’s a new door. Kinda anticlimactic if you ask us. 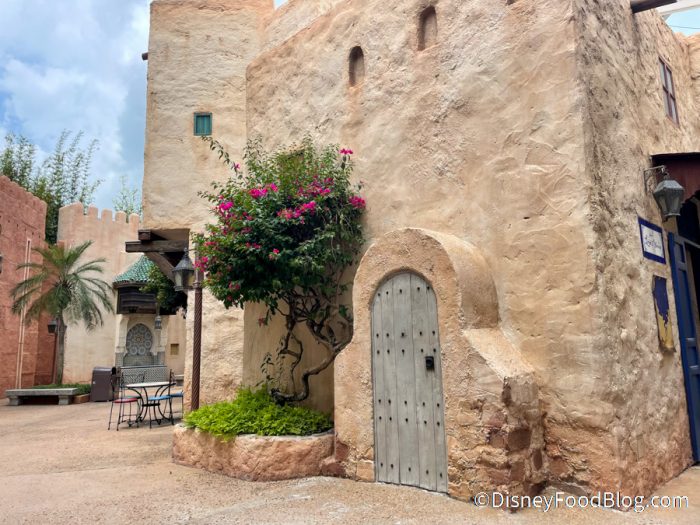 Previously, this was a common photo location for guests. Now, you can take a picture with the cool, new door. 😉

The monorail station at Disney’s Polynesian Village Resort was demolished back in January and has been in the process of getting built back up since. 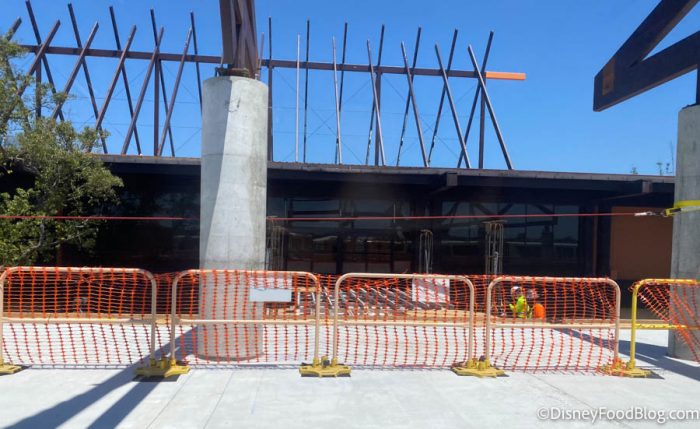 Progress at the Monorail Station

There’s now a new platform in place with concrete pillars. 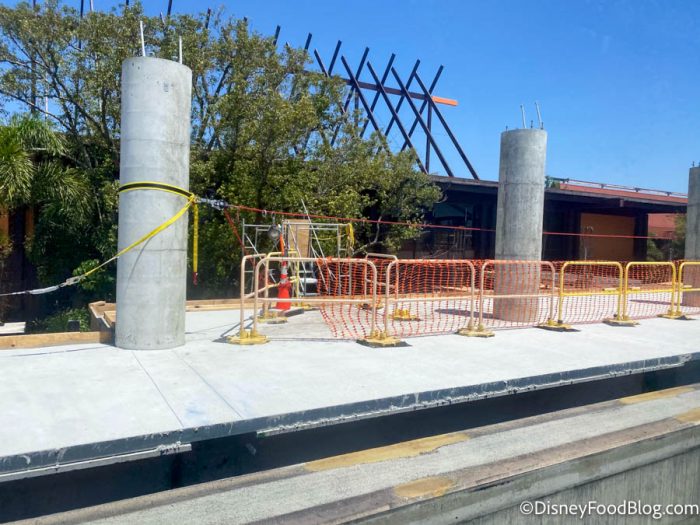 Getting closer to completion!

The resort is expected to reopen in about three months, so there’s still some progress to be made. We can’t wait to get a closer look at the new Moana elements throughout the hotel.

During one of our recent visits to Disney’s Beach Club Resort, we spotted some plastic tarps in place at a building that houses guest rooms. 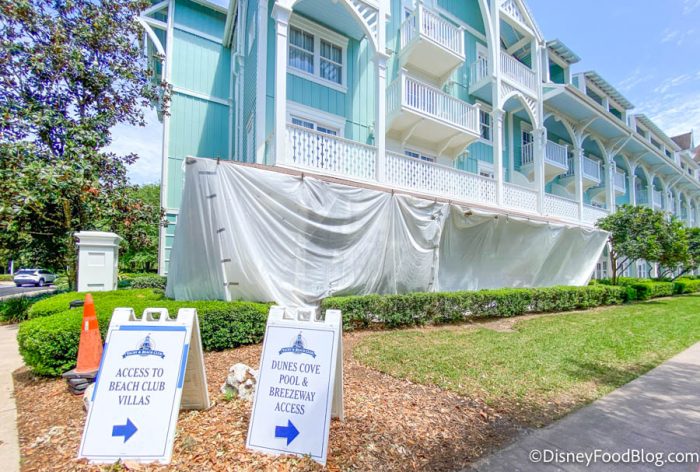 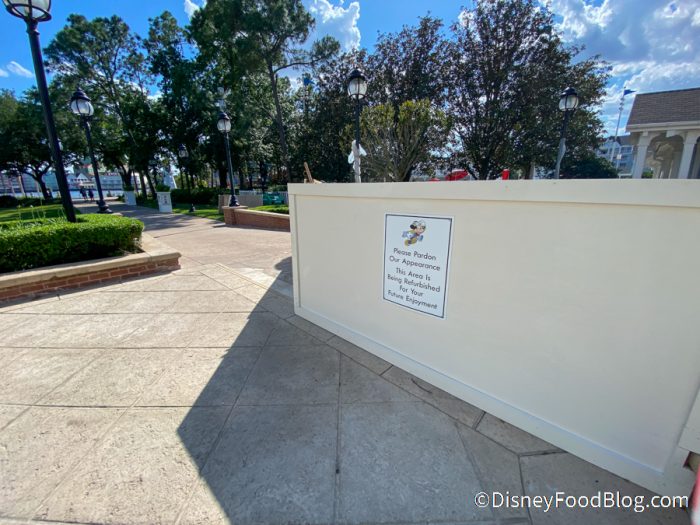 The Beach Club is expected to reopen on May 30th, so it’s possible that it’s getting a little TLC ahead of that date.

The Artist’s Palette at Saratoga Springs Resort was repainted not too long ago. Construction crews were still working in the area when we visited. 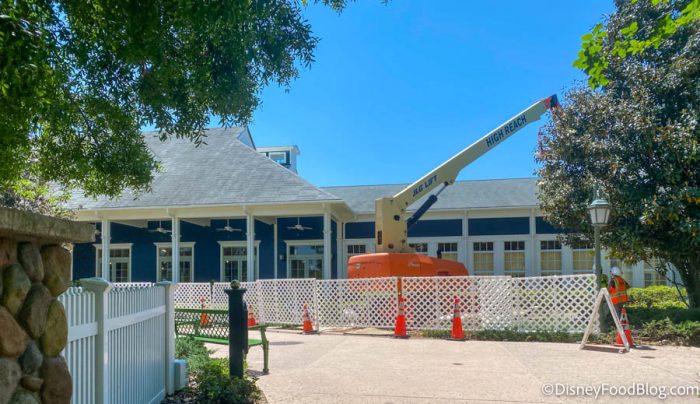 Lots of Disney Resorts seem to be getting small touch-ups before the 50th Anniversary later this year.

PHOTOS: Disney Even Brings It With Its Wet Paint Signs!

Over at Disney’s BoardWalk, some construction was taking place at Bayside Marina. 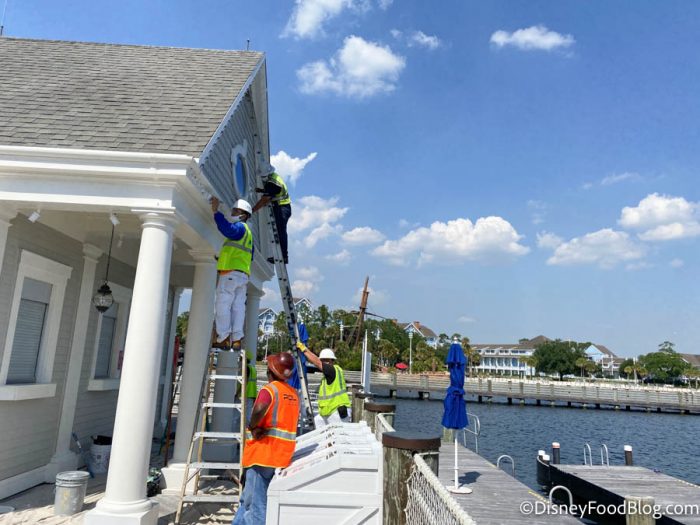 Wait…Why Are Some Hotels Reopening Twice in Disney World?

Those are all of the updates that we spotted this week and we’ll be back soon with everything you need to know about Disney World’s projects!

Are you visiting Disney World this year? Tell us in the comments!

« Our Team Just Spent An HOUR Debating On Whether This Disney World Drink Is Pinker Or Not
PHOTOS: The SCARIEST Stitch Collection Ever Has Arrived in Disney World! »