Attention all chocoholics! This next list is for YOU! Disney World is full of tasty chocolate treats, and we’re sharing ten of the absolute best chocolate desserts you can find in the parks and resorts! 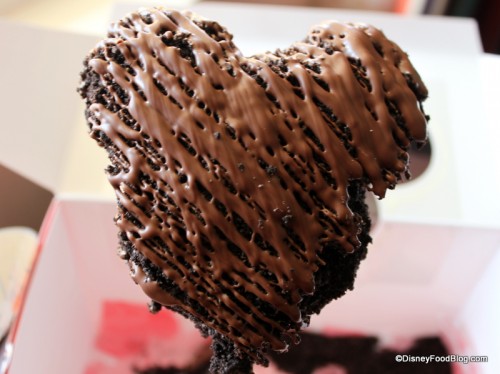 Oh chocolate, we love you so much.

These are in no particular order (we couldn’t POSSIBLY rank these even if we wanted to) so let’s dig in.

END_OF_DOCUMENT_TOKEN_TO_BE_REPLACED

OK, I’ve got a special treat for you today!!!

I first saw this little guy at The Mara at Disney’s Animal Kingdom Lodge on a trip to the World in February, and I couldn’t wait to try it!

This counter service spot is a great place to grab really interesting and healthier-for-you quick options, like the Chicken Pita or African Stew.

But they offer some pretty amazing sweet treats as well! The legendary Zebra Domes are well documented, but I’m pretty sure this one will catch some serious fans as well. I thought it was my beloved Mickey Ganache Tart, but I was in for a surprise…

I was seriously over the moon about the Mickey Ganache Tart the first time I had it while visiting Jolly Holiday Bakery in Disneyland. It quickly became one of my all time favorite Disney sweet treats!

So I was super excited when I started seeing similar tarts pop up in Disney World bakery cases as well — including here at The Mara. Cute Mickey Tarts at The Mara!

This seemed to be a slight variation on the original. To begin, there was no adorable little white chocolate Mickey face, but that wasn’t a deal breaker. And the star-shaped sprinkles provided a whimsical touch. The most striking difference at first glance, however, is the crust. While Jolly Holiday’s version is END_OF_DOCUMENT_TOKEN_TO_BE_REPLACED

Just in case you didn’t know, TONIGHT begins the Third Annual Walt Disney World Swan and Dolphin Food and Wine Classic right outside of Epcot! This year’s event will be held October 12-13 (tonight and tomorrow night) from 5:30-9:00 pm, and I think it’ll be even better than last year!

If you’re not familiar with this event, let me tell you a bit about it. The Food and Wine Classic is a fun companion event to the Epcot Food and Wine Festival, and features seminars and tasting stations from Swan and Dolphin chefs and restaurants as well as other culinary and beverage superstars. Seminars are beverage-related and feature everything from Wine Blending to Modern Mixology (check out our review here!).

But the centerpiece to the Food and Wine Classic is the tasting booths on the Causeway. To whet your appetite for the 2012 event, we have this review from last year’s Causeway. Be sure to check out this year’s menu selections to see what awesomeness is in store for 2012 guests! Tables and Set Up

And stay tuned all the way to the end of the post, where we have special rate codes for DFB members to turn their Food and Wine Classic experience into a fun-filled weekend!

This year, guests will choose from over 30 different tasting stations featuring dishes from all your favorite Swan and Dolphin eateries, including Todd English’s bluezoo, Shula’s, and others.

You’ll begin your evening at the check-in table on the Causeway. Here, your reservation will be checked and you’ll receive tickets or a wristband, as well as a plate and glass. Check In for the Causeway

The Causeway takes its name from the location where the END_OF_DOCUMENT_TOKEN_TO_BE_REPLACED

Welp, I finally got a chance to have another meal at Rainforest Cafe!

These restaurants often get a bad rap food-wise. While this is a really fun place to shop and explore, a lot of people wonder how good the food can actually be in such a themed restaurant. (Disney meals are precious and expensive things, and I hate to waste even one!)

But I hadn’t been to an RC for a while, and it was time to head back into the jungle! Come with me and find out how it was…

This is a review of the Rainforest Cafe located in Downtown Disney District at Disneyland. However, the Disney Rainforest locations (one in Disneyland, two in Disney World) are actually quite similar.

The menus themselves — and many of the decor elements — are the same, so keep that in mind if you are only planning to visit one of the two Disney World locations. One main difference: each location has a slightly different exterior. This Disneyland eatery has a sort of temple-in-the-jungle feeling to it. As you walk in, you find yourself in a very large gift shop with all manner of END_OF_DOCUMENT_TOKEN_TO_BE_REPLACED T-Rex, Downtown Disney
So…the Ice Age Indulgence is described as such: Layers of ice cream sandwiches, fudge sauce, whipped cream and Heath Bar Crunch, and it’s intriguing to say the least! It’s the exact dessert you’d have made as a kid if you were left alone in the house with a freezer full of ice cream sandwiches — admit it, you END_OF_DOCUMENT_TOKEN_TO_BE_REPLACED