Disneyland Resort closed on March 14, 2020 in response to the global health crisis. The unprecedented closure has lasted over one year. However, a reopening date has been announced, and the Disneyland theme parks — Disneyland and Disney California Adventure — will reopen to guests on April 30, 2021!

Here we are sharing everything you need to know about this historic reopening of Disneyland Resort — The Happiest Place on Earth! 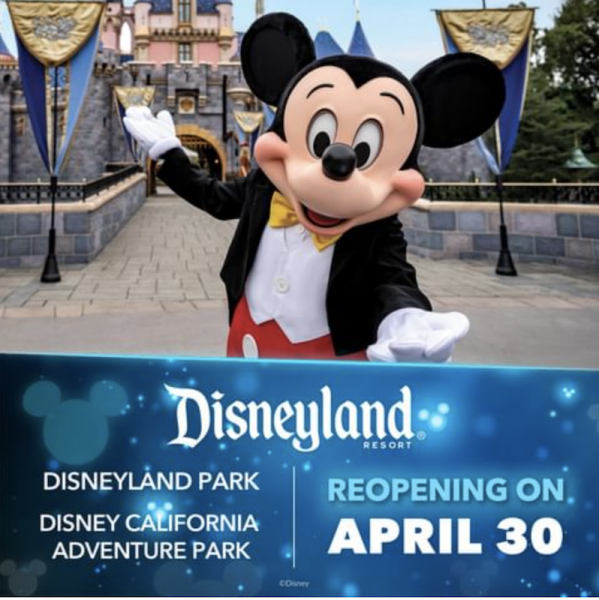 “To all who come to this happy place: Welcome.” — Walt Disney

The initial reopening phase of Disneyland Resort will follow guidelines as set by the state of California.

While Orange County is currently in the Orange Tier, Disneyland Resort will operate at a limited capacity. Further capacity adjustments can be made once the county reaches other tiers. 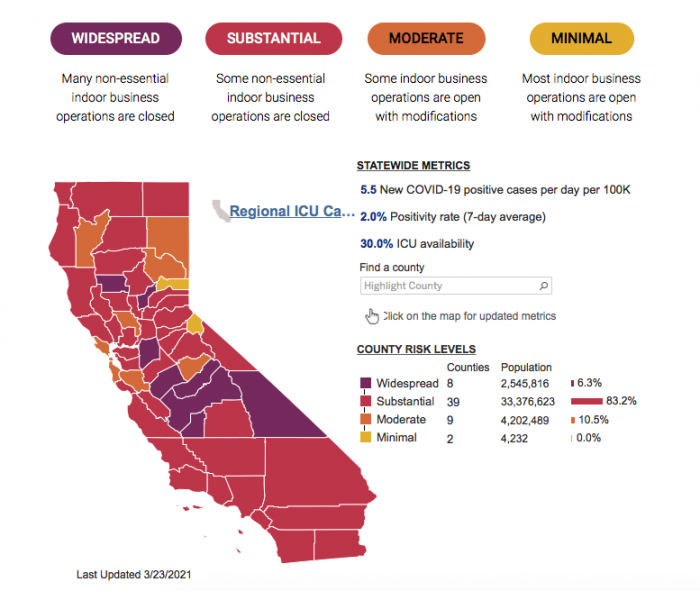 Please note that only California residents will be permitted to attend the theme parks upon initial reopening. (Over the next several weeks, updated government guidelines will be developed in partnership with the California theme parks.)

Disneyland Resort is set to implement many of the health and safety measures that have already been put into place since the reopening of the Downtown Disney District. These include — but are not limited to — heightened cleaning and sanitation measures, physical distancing measures, and the required wearing of face masks. 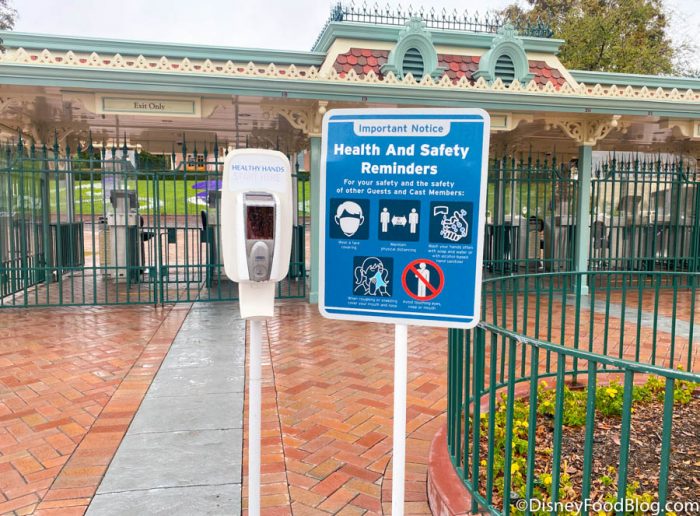 Face coverings will be required for ALL guests ages 2 and up, Cast Members, and Operating Participant employees. 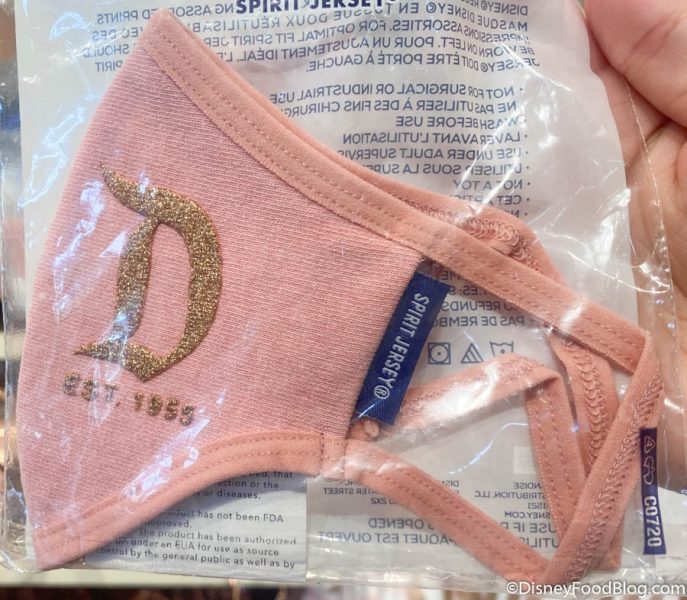 You can read the Face Mask policies in full here.

CLICK HERE to be informed of the Face Mask policies for Disneyland Resort.

Similar to the current procedures in use for the Walt Disney World theme parks, Disney has announced that ALL Disneyland Resort guests, including Annual Passholders and resort guests, will be required to obtain an advance reservation for park entry with the Theme Park Reservation System. Guests ages 3 and up will need valid admission in addition to that Park Pass reservation. Also remember that groups must be smaller than 3 households in order to visit. 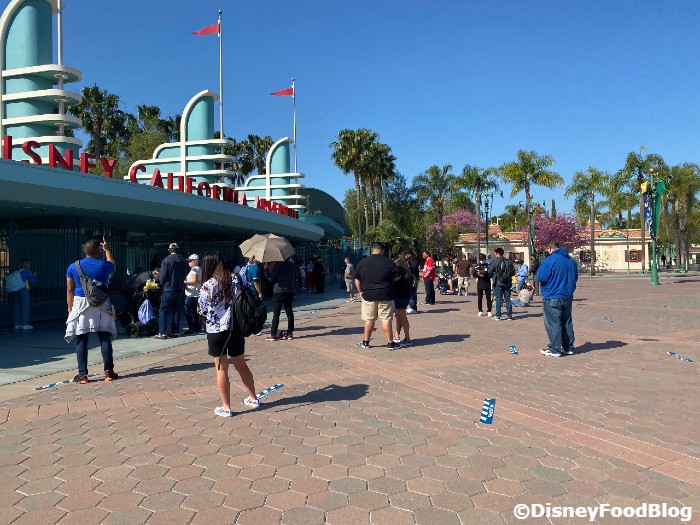 The use of the reservation system helps to monitor entry since theme park capacity will be significantly limited to comply with governmental requirements and promote physical distancing. These reservations will need to be made in advance.

Find out everything you need to know about making Theme Park Reservations here!

Disney has provided the following 4-STEP GUIDE to making a theme park reservation: 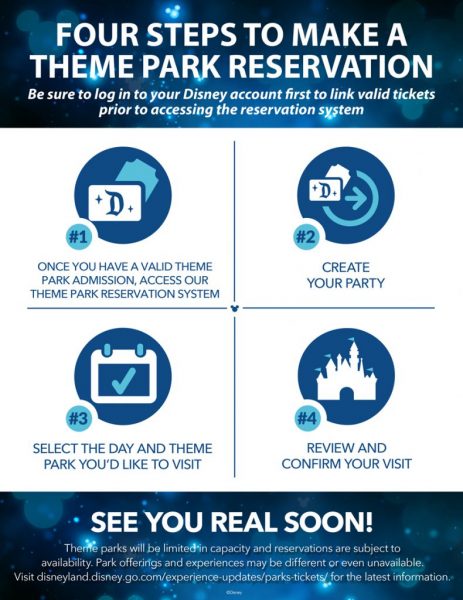 This reservation system launched on April 12th for guests with existing tickets, and ticket sales for eligible guests resumed on April 15th! Upon purchasing valid tickets, guests are immediately able to make park reservations, too.

Find out everything you need to know about making Theme Park Reservations here!

As for the tickets themselves, the previous five-tiered ticket system remains in place. These tiers allow Disneyland to charge less for entry on slower days, and more on busier days. You can find those tiered prices below. And as before, your Park Hopper tickets will cost more. 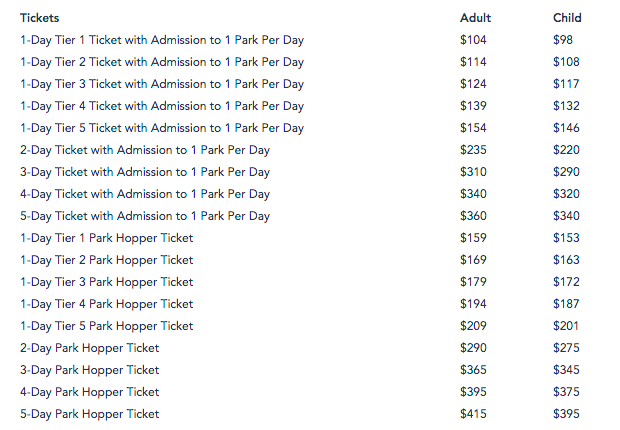 Yes, Park Hopping will also return, and will begin at 1PM each day! Upon reopening, park hours are currently scheduled for 9AM-7PM. Guests will need to make a Park Pass reservation for your first park of the day.

Disney shares that when the California theme parks reopen, “characters from dozens of favorite Disney and Pixar stories will entertain and delight guests across both parks.” 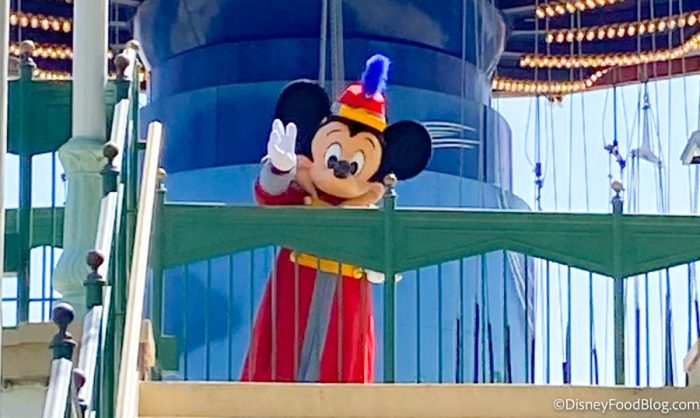 Characters could make surprise appearances along Main Street, U.S.A. and Pixar Pier, and there will also be other playful character interactions. The characters are set to “pop up in new ways and sometimes in unexpected places as they remain mindful of physical distancing.” 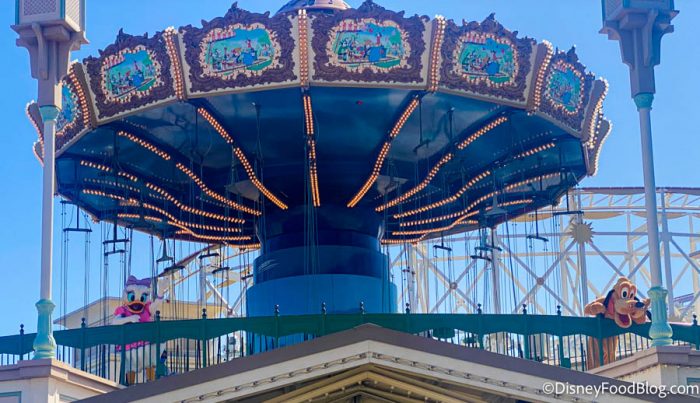 You may be able to see Mickey Mouse and Minnie Mouse waving from the train station. More of a Disney Princess fan? Disney has also said that Disney Princesses such as Mulan may appear at the Royal Theatre to wave and pose for some socially distanced selfies.

Just like in Disney World, Star Wars: Galaxy’s Edge will have a few familiar faces like Rey, Chewbacca, and Vi Moradi above the speeder garage at Black Spire Station or Stormtroopers and Kylo Ren at the TIE Echelon starfighter platform. 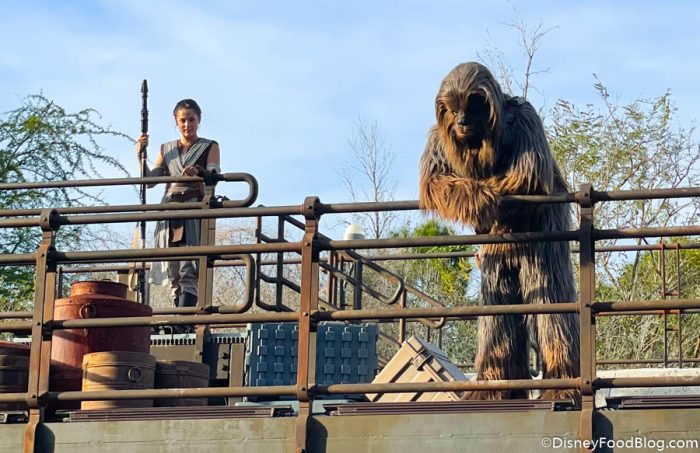 Look for Rey and Chewbacca (and more!) in Galaxy’s Edge

Of course, there will be characters in Disney California Adventure too. Disney characters may appear at Carthay Circle and the Pixar Pier bandshell. Plus, you’ll be able to spot Disney Junior characters like Vampirina and Doc McStuffins at the Disney Theater in Hollywood Land. 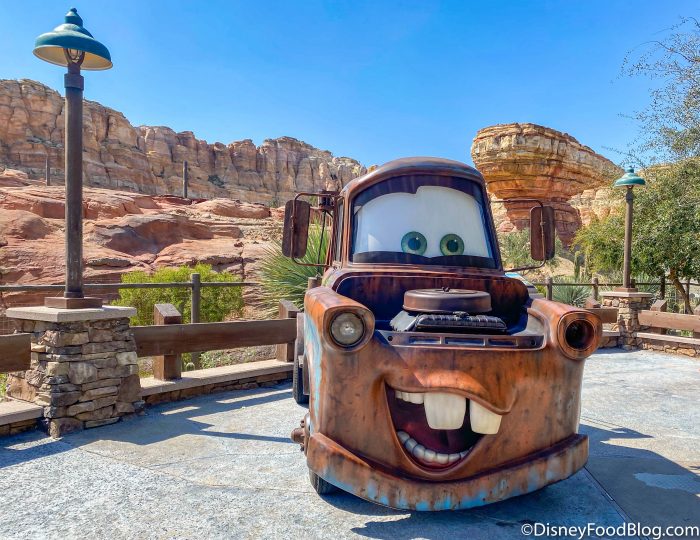 And, of course, you can take photos with Mater and Lightning McQueen along Route 66 in Cars Land.

Prior to June 4th (when Avengers Campus opens), the Hollywood Backlot Stage will play host to Avengers and heroes such as Black Widow, Captain America, Thor, Spider-Man, Black Panther, and the Dora Milaje. 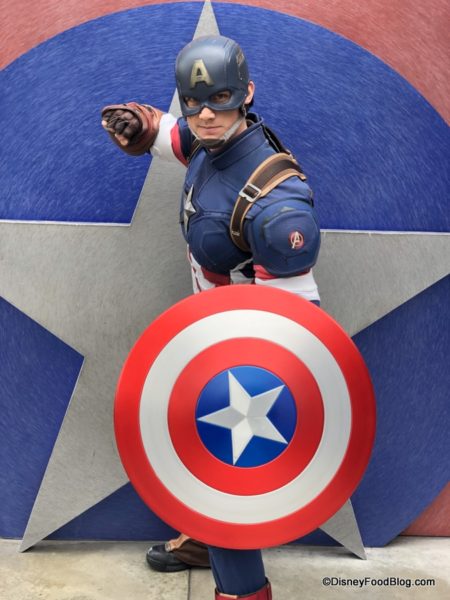 After June 4th? They’ll be hanging around the just-opened Avengers Campus!

When Disneyland’s theme parks reopen, “experiences that draw large group gatherings,” such as parades and fireworks will be temporarily suspended. 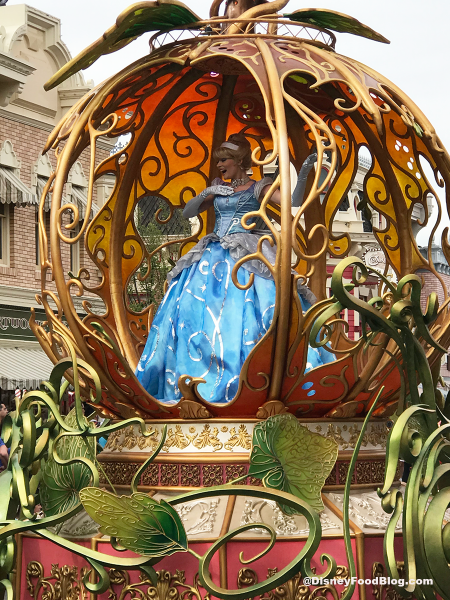 Cinderella in the Magic Happens Parade

According to Disney, these experiences “will return at a later date.”

The following attractions are confirmed to reopen along with the Disneyland Resort theme parks:

If you’re planning on eating while you’re in the parks, reservations for select locations are expected to open on April 22nd, with limited capacity. You’ll be able to book your dining reservation 60 days in advance. For Quick Service restaurants, you can utilize Mobile Order to order and pay ahead.

The following restaurants are confirmed to reopen along with the Disneyland Resort theme parks: 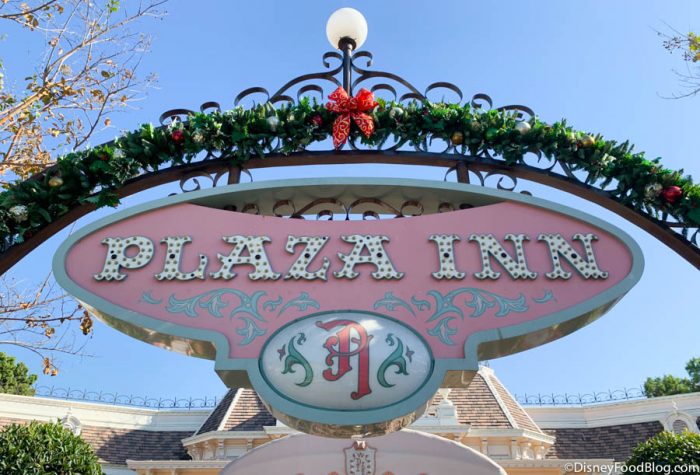 Disneyland’s Grand Californian Hotel & Spa plans to reopen on April 29th, 2021, with limited capacity. Reservations are open as of April 15th, and you can learn more about the booking process here.

While the main resort will reopen on April 29th, the Villas are still set to reopen on May 2nd.

The two other Disneyland Resort hotels — Disney’s Paradise Pier Hotel and the Disneyland Hotel — will reopen at a later date.

And note that over 50 (!!!) nearby hotels just off Disneyland property are offering some terrific discounts — find out more here!

“The Magic is Back” Merchandise

Guests attending the reopening of Disneyland Resort will have access to a new line of merchandise just for the VERY special occasion: “The Magic is Back” merchandise! 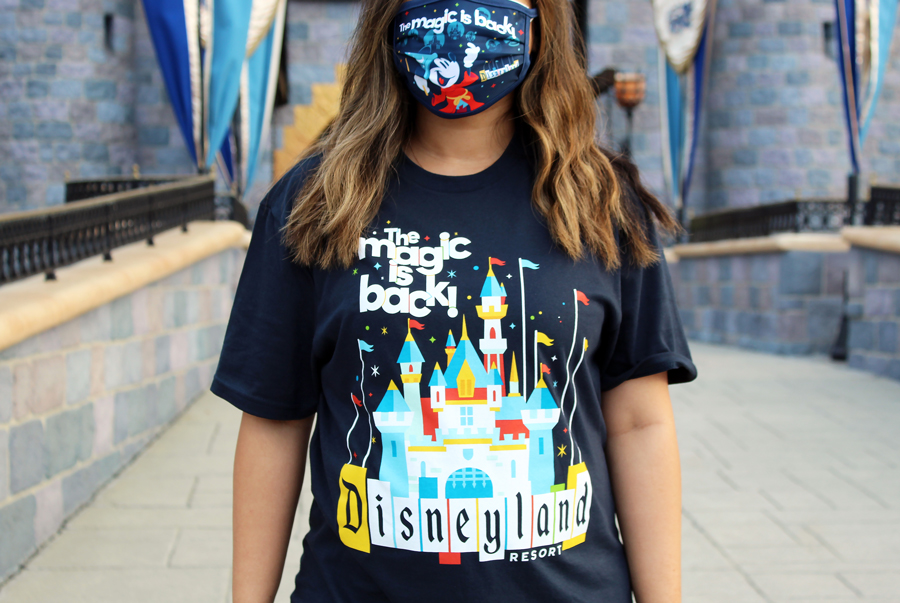 Get a sneak peek of “The Magic is Back” line here!

We hope you join us here on the DFB on April 30th for the Historic Reopening of Disneyland Resort!

We will continue to update this page with ALL of the information for the reopening of Disneyland Resort, so check back often!