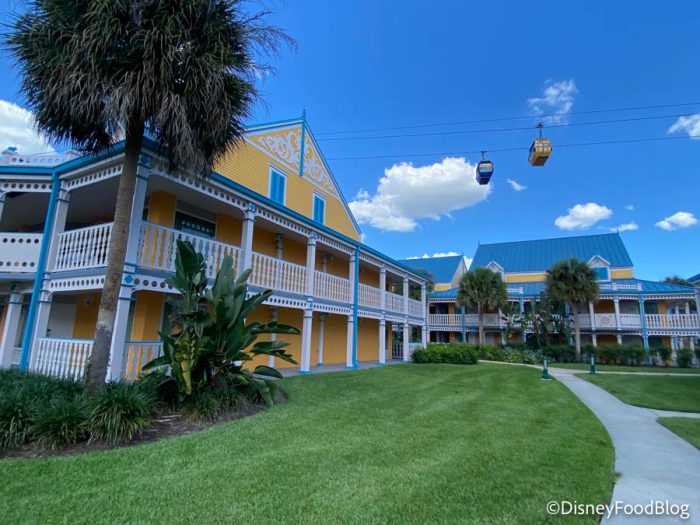 Bust out your Hawaiian shirt and strap on your sandals, it’s time for a new resort accessory! We found some exclusive new Loungefly Minnie ears at the Caribbean Beach Resort’s Calypso Trading Post!

END_OF_DOCUMENT_TOKEN_TO_BE_REPLACED

Walt Disney World is home to several moderate category resorts, but their food is far from moderate! You’ll find a wide variety of eats at each moderate resort from grab and go and pool bars to quick service and table service restaurants.

We wanted to bring you up to date on what’s going on menu-wise — and what a few of our favorites are! — at Port Orleans French Quarter and Riverside in case you’re traveling there soon! The resort pays homage to all things New Orleans and Mardi Gras — which means beignets are plentiful here!

END_OF_DOCUMENT_TOKEN_TO_BE_REPLACED

It was a long wait, but the doors finally opened on the much anticipated Centertown Market, Banana Cabana, and Sebastian’s Bistro at Disney World’s Caribbean Beach Resort this week. We were there on opening day to check out what’s new, get the vibe, and, of course, try the new food and drinks available at these locations! Disney’s Caribbean Beach Resort has been undergoing a long refurbishment that includes the addition of the new Skyliner system as well as a complete makeover of their dining locations and more. We tried Banana Cabana for drinks and apps, and Sebastian’s for lunch, then we were on to dinner at Centertown Market. END_OF_DOCUMENT_TOKEN_TO_BE_REPLACED

Disney’s Caribbean Beach Resort has been quite the center of attention this week! We’re bringing you one another first look from Old Port Royale: the newly renovated Calypso Trading Post! The decor is simple and rustic but still gives off a laid-back tropical vibe – LOVE the stacked crates and tall shuttered doors!

END_OF_DOCUMENT_TOKEN_TO_BE_REPLACED

Welcome back to the Banana Cabana!!

This watering hole in Disney World’s Caribbean Beach Resort has been a well-loved bar for many years. Personable bartenders, cold drinks, and close proximity to the Fuentes del Morro pool always made Banana Cabana a welcome and relaxing oasis.

Caribbean Beach Resort, however, began a massive Resort-wide refurbishment (or, in Disney terms, a “reimagineering”!) last year. And Banana Cabana — along with the Resort’s table service and quick service dining options — was closed for a reimagining of its own.

And, as you’ll soon see, it’s received quite the treatment. It’s basically been transformed into an entirely new space!

So we couldn’t be more excited to see — and say “Welcome back!” to — the newly reopened Banana Cabana Pool Bar! Banana Cabana was previously located in its own standing area directly next to the resort’s main pool. And while it still resides right next to the pool, it’s now also tucked next to the new Sebastian’s Bistro in Old Port Royale facing Barefoot Bay.

END_OF_DOCUMENT_TOKEN_TO_BE_REPLACED

And it’s been a long time coming. The lengthy refurbishment of Caribbean Beach Resort has spanned the hotel’s property, and has happily resulted in a new table service option, Sebastian’s Bistro, and entirely revamped Banana Cabana (along with refurbishments to the Resort outside of dining). And though temporary dining options were put into place, the absence of a central Counter Service option for the Resort’s guests felt like the biggest missing piece during the refurb. END_OF_DOCUMENT_TOKEN_TO_BE_REPLACED

We’ve been keeping you updated on the progress of the transformation of Caribbean Beach Resort. One of the big changes includes updates in the dining locations. Today, Disney announced the menu options for Centertown Market and the Banana Cabana Pool Bar.

Centertown Market is the  quick-service option at the resort themed as an indoor street market with seating or grab-and-go options.

END_OF_DOCUMENT_TOKEN_TO_BE_REPLACED Disney World’s Mobile Order system, accessible through the My Disney Experience App, has been around for just over two years. Mobile Order lets you skip the register lines in participating restaurants by ordering and paying for your food in advance through the app. Since its launch, we’ve seen the Mobile Order program expand to more dining locations within the four theme parks, and a very short lived couple of days for the Contemporary Resort’s Contempo Cafe. Now, it seems Mobile Order is giving Resort Counter Service options another go as it has expanded once again to include Spyglass Grill at Disney’s Caribbean Beach Resort.  END_OF_DOCUMENT_TOKEN_TO_BE_REPLACED