Disney Cruise Line has cruise ships (filled with Disney theming!) that sail to a variety of destinations worldwide. Since we’re not currently on our way to the Bahamas (like we want to be), we’re doing the next best thing and looking at ALL of the restaurants onboard these ships. So, whichever ship you’re planning to board soon, you can check out this list to see what kinds of dining options are available! END_OF_DOCUMENT_TOKEN_TO_BE_REPLACED

Love the sights, sounds, and smells of Cars Land? Well, Disney whipped up a recipe that is sure to help tie you over until you can race back into Disneyland Resort! 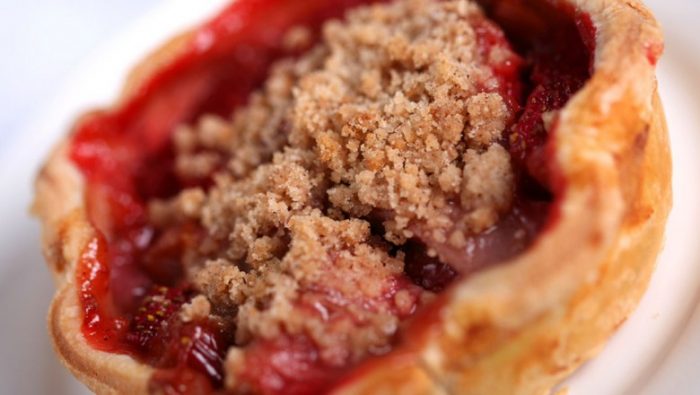 Flo’s V8 Cafe is a Radiator Springs staple and serves up some of the best quick-service dishes on this side of Route 66. (It also has an unbeatable view of Cadillac Range in Radiator Springs Racers!) We’ve got our hands (tires?) on a D23 recipe for Flo’s famous Strawberry-Rhubarb pie!

END_OF_DOCUMENT_TOKEN_TO_BE_REPLACED

Oh yeah… there’s another Disney foodie guide for the holidays and this one is for California Adventure! There are going to be TONS of delicious holiday treats in Disneyland this year and we’re coming at you with a run down of all of them! From holiday churros to a Holiday Dinner Pizza (GENIUS), there’s a treat or eat for everyone at California Adventure this year. So, let’s dive in!

END_OF_DOCUMENT_TOKEN_TO_BE_REPLACED Then you’ll want to know that you’ll be fueling up with items from a new menu for lunch and dinner!

END_OF_DOCUMENT_TOKEN_TO_BE_REPLACED

Advertisements are up around Disney California Adventure’s future Cars Land! My favorite one, of course, is the billboard for Flo’s Cafe, one of the new dining spots “coming soon!” So, I have clearly developed a little obsession about Cars Land. I think it’s going to be one of the coolest things to ever come to Disneyland, and it’s natural for the obsession to extend to where I’ll be eating in Cars Land. Hopefully you’ll indulge me. 😉

We recently posted a piece speculating about what would happen with the table-service restaurant slated for Cars Land in Disney California Adventure. We’d heard some rumors about a “drive-in” themed restaurant similar to Disney World’s Sci-Fi Dine-in, which might replace — or accompany — the originally proposed “Flo’s Cafe.”

These rumors were clarified with a comment on our previous post from Michael Crawford of Progress City USA, “There was a drive-in proposed, but it’s not going be a part of the first phase of this area. Its budget was diverted to other things. Instead, it’s likely that it will be added later. I asked an Imagineer if it had been cut completely or might resurface later, and he said that it’s definitely something that they still want to do.” So, in addition to what might be two very cool restaurants in Cars Land, we also learned that the Sally’s Motel cones will sell “cone-themed” quick service items, like “Cone on the Cob!”

Just wanted to keep you updated!