We hope you’re hungry! Orlando has practically hundreds of incredible fine dining options to choose from, like Citricos and Victoria and Alberts, which are both located at Disney World’s Grand Floridian Resort. If you’re looking for a unique dining experience outside of Disney World theme parks or resorts, you might want to check out the Epicurious experience at the Waldorf Astoria Orlando and Signia by Hilton Orlando Bonnet Creek! 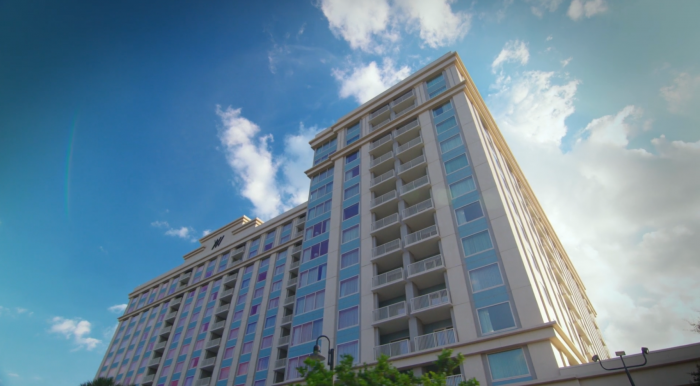 Have we piqued your interest? Come with us on a dining adventure as we taste foods from some popular restaurants at Waldorf Astoria Orlando and Signia by Hilton Orlando Bonnet Creek!

END_OF_DOCUMENT_TOKEN_TO_BE_REPLACED

Change is something that has become synonymous with Disney World over the years and more particularly since the COVID-19 pandemic. The changes with FastPasses+, entertainment, and extra magic hours had some people wondering if a trip to Disney World was even worth it anymore. 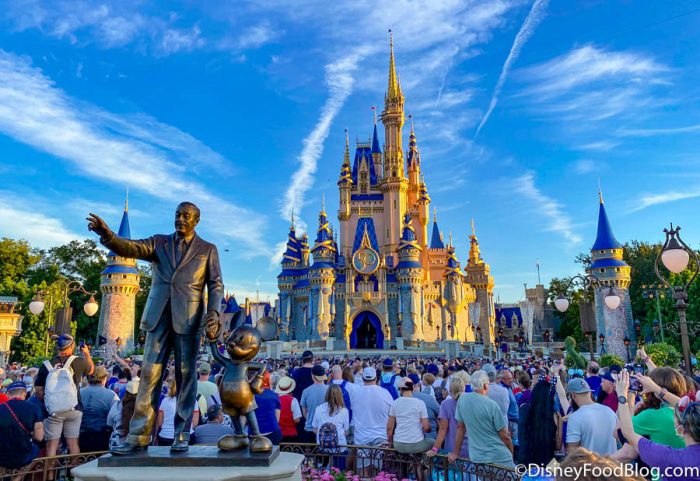 Mornings can be busy in Magic Kingdom!

Speaking of Extra Magic Hours, in 2021, Disney World replaced the hotel perk with Early Theme Park Entry and Extended Evening Hours. If you are unfamiliar with Extra Magic Hours, they were first implemented to allow guests staying at a Disney Hotel to either gain early access or stay later in the theme parks. The idea is still the same, but a bit simpler with Early Theme Park Entry allowing guests to enter any of the parks 30 minutes early every day to get a head start. But, which hotels have access to this benefit? Well, we have a FULL LIST for you! END_OF_DOCUMENT_TOKEN_TO_BE_REPLACED

We’ll admit it: we don’t really want to see the 2020 Taste of EPCOT Food and Wine Festival end (and as EPCOT hasn’t posted an end date yet, we might just get our wish!). But now, we’ve got ANOTHER food and wine event in the Orlando area! 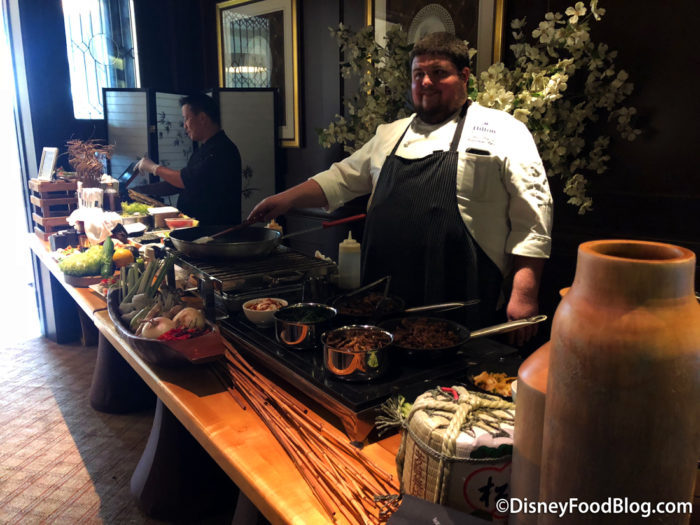 Taste of Asia Station at Food and Wine Weekends

That event is Food and Wine Weekends, and it happens at the Waldorf Astoria Orlando and the Hilton Orlando Bonnet Creek!

END_OF_DOCUMENT_TOKEN_TO_BE_REPLACED

A BRAND NEW hotel has just joined the ranks of the Bonnet Creek-area hotels, which are located INSIDE the gates of Walt Disney World.

END_OF_DOCUMENT_TOKEN_TO_BE_REPLACED

The 2018 Epcot Food and Wine Festival is happening now through November 12 celebrating food and wine (and more) from around the world. The Food & Wine Weekends at the Waldorf Astoria features a selection of tasting events highlighting dishes from the hotel’s signature restaurants along with their master mixology team and pastry team. Let’s check out some of the goodies. END_OF_DOCUMENT_TOKEN_TO_BE_REPLACED The most impressive, I thought, was the END_OF_DOCUMENT_TOKEN_TO_BE_REPLACED

OK, I totally have ANOTHER awesome waffle sandwich to share with you today!!

And you can find it in an unlikely location…the Waldorf Astoria Orlando Resort. Nestled in Bonnet Creek, within the main gates of Walt Disney World, it’s a great mix of convenience and refinement. Plus, there are some seriously killer views of Disney’s theme parks from its balconies. This spot’s namesake is the fashionable Peacock Alley of the Waldorf Astoria in New York City (the original was given the name due to the colorful peacock feathers the ladies wore in their hats); but while it’s elegant, you can definitely choose this location for a relaxed and casual lunch.

Everything about Peacock Alley makes me want to take a deep breath, sink into a comfortable chair, and relax. The cool colors and motif of peacock feathers surrounds you throughout (even on the carpet!). The view is of the Waldorf’s pool area and golf course. And you  may even catch a glimpse of Tower of Terror at Disney’s Hollywood Studios! There is a luxuriously appointed bar on one wall, and there’s even a peacock etched in the mirror. Check out this awesome END_OF_DOCUMENT_TOKEN_TO_BE_REPLACED

Who’s gearing up for Valentine’s Day? Disney, that’s who! If you’re planning to be in the parks this week, you’ll find plenty of decorated treats and eats celebrating the holiday. And Disney World and Disneyland are both offering some great specialty romantic dinners!

In the news this week…

We’ve got additional food news, including restaurant closures, Mardi Gras at Ralph Brennan’s Jazz Kitchen in Downtown Disney Anaheim, and LOTS more, on our Disney Food News Pin Board! Head over and check it out!

If you find a fun new food — or other awesomeness — in or from Disney, share a photo with us on facebook or twitter so we can add it to our DFB Reader Finds each Sunday! And here’s an awesome Star Wars Valentine’s Yoda Gift from Target sent to us by Reader Jon. This week we celebrated the grand launch of The DFB Guide to Walt Disney World® Dining 2013 e-Book! This valuable resource is fully updated for 2013 visits, and is now available for purchase and download to help you make the most of your dining opportunities while in Disney World. It’s guaranteed to help you navigate your way to delicious dining on your next vacation! And if you’re ready to get yours now, head on over to DFBGuide.com to pick it up!! For more detailed information and screen shots from the e-Book, head over to DFBGuide.com! With a 100% money-back guarantee, you have nothing to lose! 🙂

Want even more savings?! We’ve bundled three of our most popular guides into one discounted price! Our DFB Guide & Snacks Bundle offers:

All three are being sold together for the first time –and for a massively discounted price. Just $29.95 instead of the regular price of nearly $42.00.

goes to Epcot’s Via Napoli for Aqua Fresca.

Yesterland takes a look at the history of the Corn Dog Castle in Disney California Adventure.

AllEars shares an unexpected imagineering marvel at Be Our Guest restaurant in the Magic Kingdom.

DisneyCaribbeanBeach.com shares the new menu from Shutters at this tropical Disney World resort!

Running at Disney enjoys breakfast at the BoardWalk Inn’s Kouzzina, including allergen-free waffles!

Whew! What a week! As you know, I’ve been busy at the Epcot Food and Wine Festival eating my way around the World and updating ALL of our World Showcase Booth food pictures!!

But the best part? TV!! Those of you in Orlando may have seen me talking Food and Wine on Fox 35 News Orlando last Tuesday morning; and if you’re in Tampa you may have heard me chat about the Festival on WTSP 10 News yesterday morning!

Be sure to check out this clip all about my money-saving tips for the Epcot Food and Wine Festival!

But in addition to that, we’ve also got some fun new updates from the rest of the World of Disney to share with you… . Let’s take a look!

Get ready to dig in to this week’s sweet and savory headlines from Disney!

We’ve got additional food news (including a clawdaddy food truck at Downtown Disney, self-ordering kiosk at the Epcot Food and Wine Festival, restaurant closure updates and LOTS more) on our Disney Food News Pin Board!

The 2012 Epcot Food and Wine Festival is in full swing, but we’re still updating our coverage daily with World Showcase booth reviews, new photos, and other news popping up from the Festival Center!

Check out this fun video of some Food and Wine Festival Entertainers in Future World!

Find all of the latest Epcot Food and Wine Festival News and Reviews here, and stay tuned this week for our take on several seminars and events around the festival (including exclusive pics of ME in WADERS in the OCEAN SPRAY CRANBERRY BOG!).

Also, our great DFB Deals of the Week for the Epcot Food and Wine Festival Opening Week have been extended!!

Check out the awesome discounts we have available on our Disney Dining e-Book Bundles and our 2012 Epcot Food and Wine Festival Guide!

shares some very cool Alice in Wonderland teacups and saucers (which I haven’t ever seen before)!

Passport to Dreams takes us on a vintage tour of Disneyland’s food service history. Wow!

Main Street Gazette dishes up Jerk Spiced Chicken Drumettes from the Caribbean marketplace at the Food and Wine Festival.

All Ears shows us the history of Dinoland, including the Restaurantosaurus.