Oogie Boogie Bash kicked off for the 2021 Halloween season in Disney California Adventure on September 9th, and we were there to check out all of the specialty food, entertainment, characters, and spooky vibes! 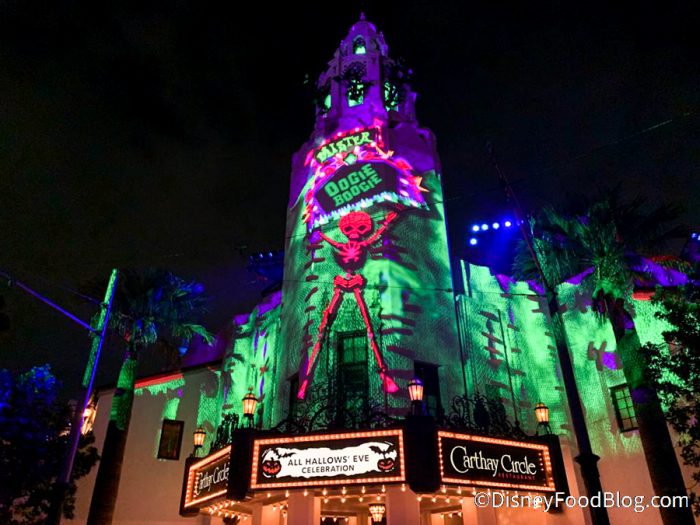 If you’re looking to sweeten your evening beyond all of that candy you’ll receive, there’s the Sonoma Terrace Oogie Boogie Bash Dessert Party! Party attendees can enjoy a selection of specialty cocktails, non-alcoholic beverages, and a variety of sweet treats, plus preferred parade viewing! So is this pricey extra worth the cost??

The Dessert Party is NOT included with admission to Oogie Boogie Bash. Those who wish to attend pay an additional $84 per guest, and payment is due at the time of booking. Oogie Boogie Bash already costs from $114-169 (depending on the night that you go), so that’s a steep price for an add-on, so was it worth the price?

There are two dessert parties each night of Oogie Boogie Bash, with each one tied to one of the parade times that evening. We attended the first party of the evening set for the 7PM parade, which meant we could arrive at Sonoma Terrace 45 minutes prior to the start of the parade, at 6:15PM. We arrived right on time and we were brought to our table! 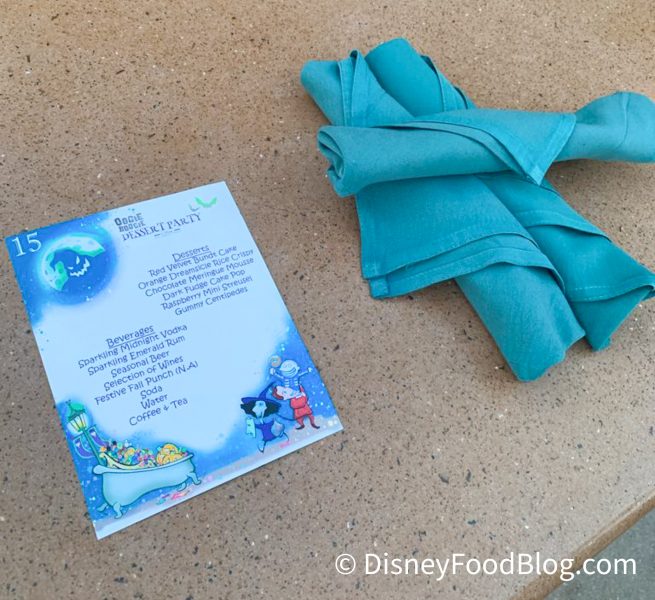 Our table was right in front of Sonoma Terrace, which gave us an unobstructed view of the parade with no one in front of us (but more on that in a sec!). Additional seating is available in front of Golden Vine Winery. We were given a small menu card that included all of the food and drink items available to guests attending the Dessert Party. 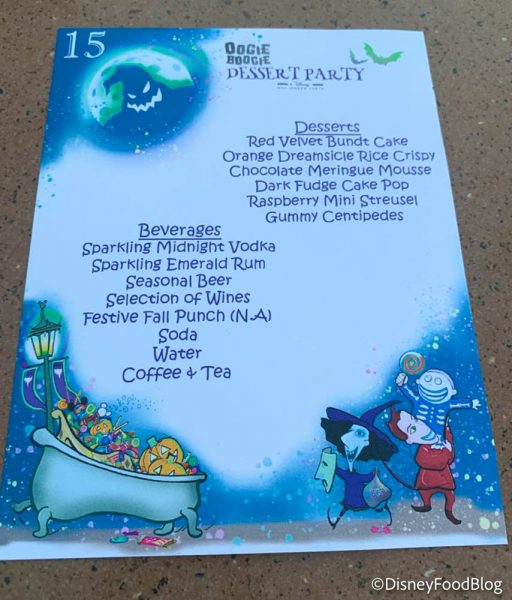 Then, it was time to feast on some spooky sweets!

Click here to check out the immersive treat trails at Oogie Boogie Bash!

All of the desserts were brought out to us at one time on a plate, giving you the option to try a little bit of everything. As far as the desserts go, they were all pretty good. The desserts available include a Red Velvet Bundt Cake, an Orange Dreamsicle Rice Crisp, a Chocolate Meringue Mousse, a Dark Fudge Cake Pop, a Raspberry Mini Streusel, and Gummy Centipedes! 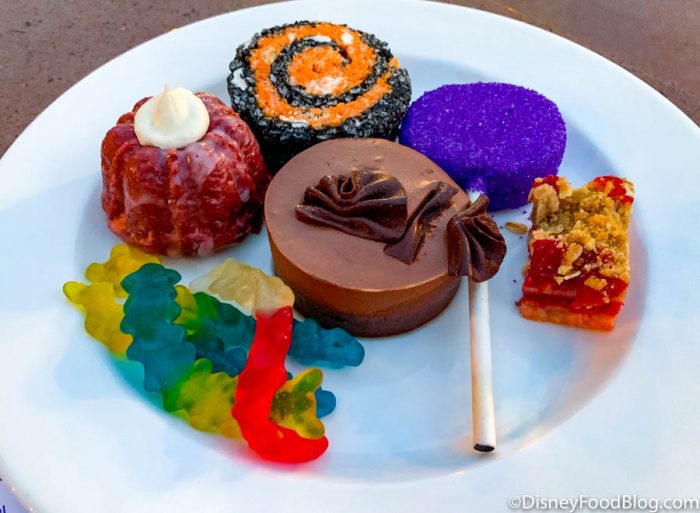 For beverages that the whole family can enjoy, there’s Water, Coffee and Tea, Soda, and a nonalcoholic Festive Fruit Punch. For those ages 21 and older, there’s Sparkling Midnight Vodka, Sparkling Emerald Rum, Seasonal Beer, and a Selection of Wines.

Although the Cake Pop reminded us an awful lot of the Cake Pops Disney regularly sells in their candy stores, it was still very yummy. 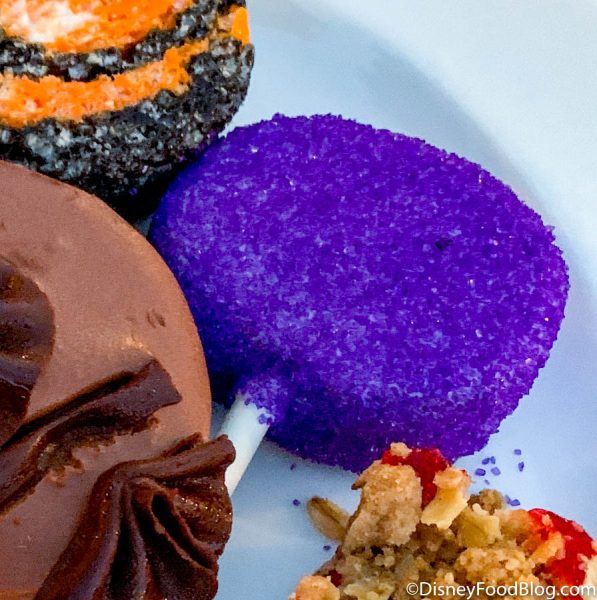 The Chocolate Meringue Mousse was definitely on the rich side; chocolate lovers will fall head over heels for this dessert! We’re not sure where the meringue component was though — it was your basic chocolate mousse. This was one of the better desserts on the plate. 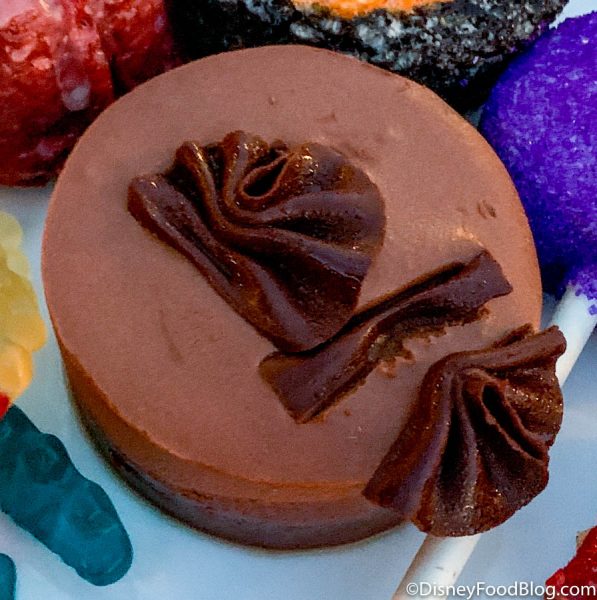 We think the Raspberry Streusel will be a hit even if you aren’t the biggest raspberry fan — it had a great balance of textures and the flavor was the perfect level of sweetness. The streusel portion was buttery and crisp while the raspberry was sweet and jammy. Although it is quite small and you’ll probably finish it in just two bites! This surprised us as one of our favorites! 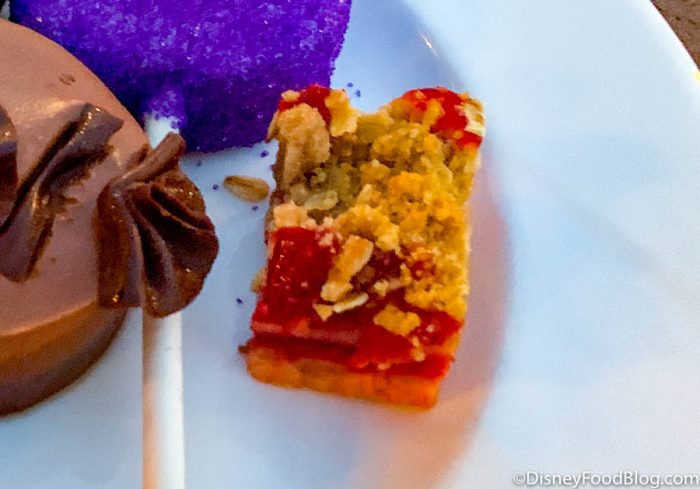 The Orange Dreamsicle Crisp had a unique look to it, but it was just alright. We didn’t pick up much of the orange flavor, and we found that it was harder to bite into it than the other Rice Krispies you can get around the parks. Major props for cuteness though. The black and orange swirl was really fun! 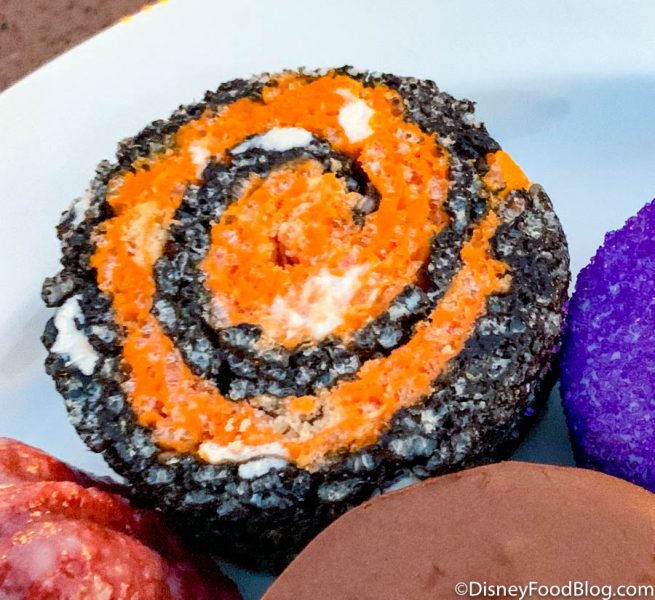 The Red Velvet Bundt Cake overall was just average for us, there wasn’t anything right or wrong with it. The cake itself was moist and it had a nice glaze, which added a bit of sweetness. If you’re a Red Velvet fan, you’ll appreciate that it’s included in this assortment of desserts! 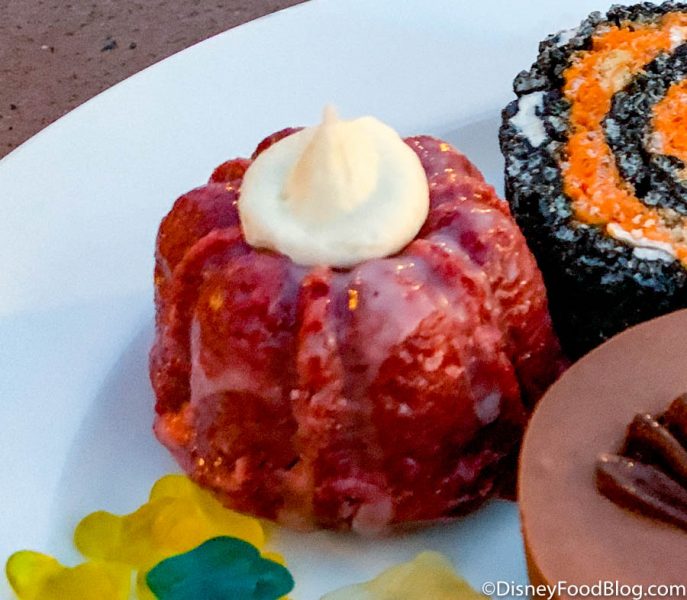 Finally, how can we forget about the Gummy Centipedes?! Yep, they tossed a handful of gummy worms on a plate and called it a day. They’re…fancy gummy worms though? Like, they have lil legs? 😂 This was, not surprisingly, kinda a throwaway. It adds some color to the plate and TBH, we enjoy a good gummy worm so we didn’t mind em. But yes, you paid a lot of money to be served gummy worms. 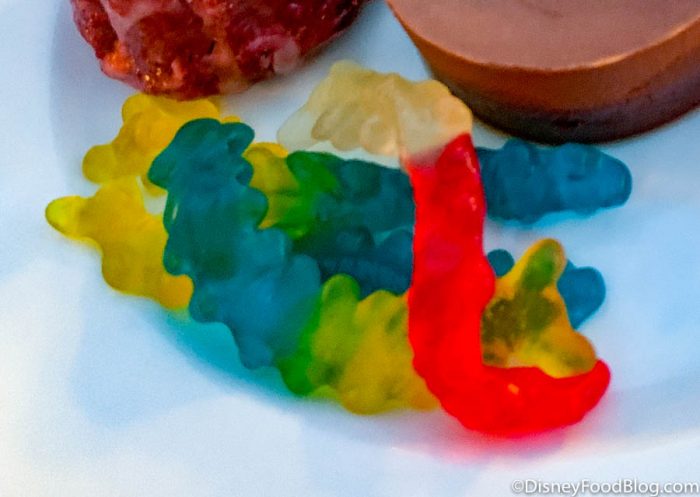 For drinks, you order whatever beverages you want with a server who brings them out to you. We grabbed the nonalcoholic Festive Fruit Punch, which is a mixture of Pineapple, Orange, and Cranberry Juices with Sprite and topped with Whipped Cream. 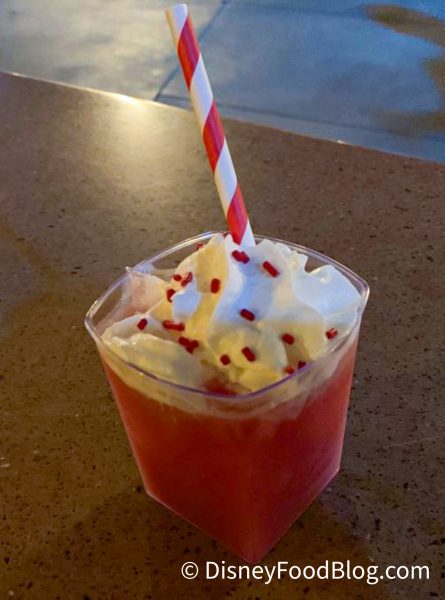 We thought it was sweet, bubbly, and refreshing — just the kind of specialty drink that the kids would enjoy!

Click here to check out the party-exclusive food at Oogie Boogie Bash!

Another big selling point for attending the Dessert Party is that it comes with preferred parade viewing. The Frightfully Fun Parade has two showings during each party at 7:45PM and 10PM. The parade kicks off with a short processional featuring none other than The Headless Horseman, and we had one of the best seats in the house!

The parade viewing is at your table where you’re dining, so you don’t have to move anywhere to enjoy the show! 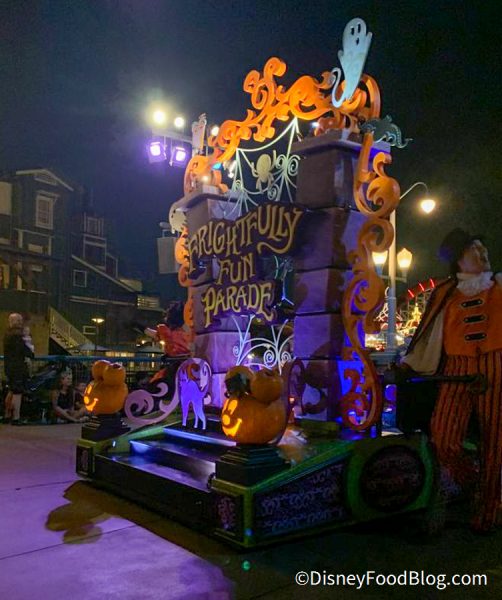 Sonoma Terrace is located right along the parade route, providing a convenient way to transition from desserts to parade floats. 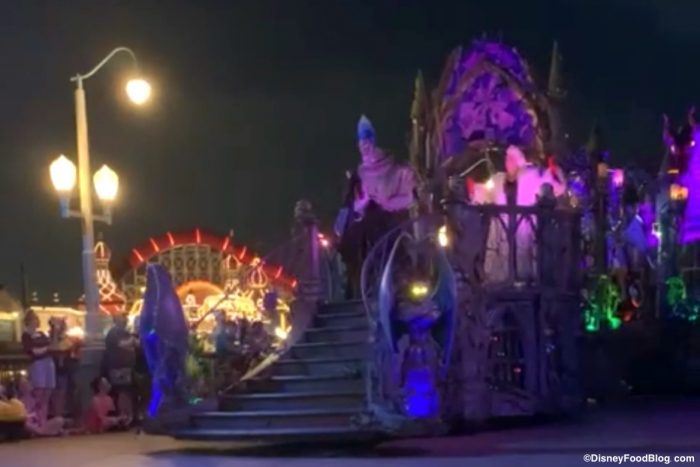 We had a great view!

Once the parade concludes, you are free to roam the rest of Disney California Adventure and enjoy the rest of your evening at Oogie Boogie Bash! From the time we arrived to the end of the parade, we were there for roughly 75-90 minutes.

Click here to check out more of the entertainment from Oogie Boogie Bash!

Skip the Dessert Party if…

$84 per guest is quite a hefty chunk of change to shell out for a small plate of average to good desserts. That said, adults can enjoy wine, beer, and cocktails from a seated area with an unobstructed view of the parade — and for some, that can be worth the cost. In our experience, however, it was easy to scope out a decent spot along the parade route just minutes before it started (keep in mind that this is a limited-capacity event!), especially if you can hang around through the second showing at 10PM.

While we appreciate the addition of a dessert party (something that was lacking from Disney After Hours Boo Bash in Magic Kingdom), we were hoping to find more reasons to justify the price tag. Here’s the real kicker too — there’s another special dining option we didn’t mention yet. So we paid 84 bucks for essentially a plate of desserts and a drink while we watched the parade, right? Well, we could have paid just $55 for a three-course meal and access to priority viewing of the parade. Yeah…we know. Which sounds like a better deal to you??

Just next door at Wine Country Trattoria, they’re offering the Oogie Boogie Bash Dining Parade Package. It’s $55 for adults, $40 for kids and offered from 3-6PM (so before the party but you need an Oogie Boogie Bash ticket to attend and come back to a special parade viewing area during the party). You DON’T waste precious party time eating, you still get good parade spots, and kids even get their own filled popcorn bucket to keep! Oh yeah, and it’s WAY CHEAPER FOR WAY MORE. If you’re scratching your head why we paid 84 bucks for THIS event instead of the Dining Parade Package…so are we.

If the parade wasn’t SO easy to get a great view of and if the offerings weren’t so meh compared to the price paid, this would be a much more enjoyable event we think many folks could justify. But to eat just a little plate of desserts on a basically empty parade route? It really is hard to tell you this was worth it. Parties-within-a-party like this are a hard sell. You already shelled out big bucks for the event, now you’re contemplating shelling out MORE big bucks for an extra at said event. Sometimes, you can justify the cost. Here? Not so much.

Oogie Boogie Bash is sold out for the 2021 season, so if you already have your tickets secured be sure to read up on all of our coverage from night one so you get an idea of what to expect! We’ll continue to bring you the latest coverage from both coasts this holiday season.

Click here to see more of our live coverage from Oogie Boogie Bash!

Do you have tickets for this year’s Oogie Boogie Bash? Let us know in the comments!