Walt Disney World reopened with limited capacities throughout every building on the property. All gift shops, restaurants, rides, and shows were reduced to accommodate physical distancing between travel groups. 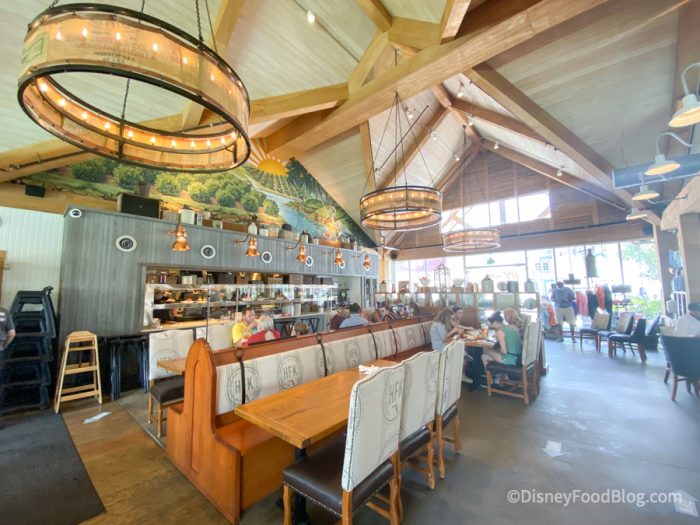 Upon reopening, Disney World had a reduced capacity of 25% and the theme parks attracted fewer crowds. It was recently announced that the theme parks were raised to 35% and we’ve seen an uptick in crowds over the holidays. Attractions are seeing increased wait times and Disney has been adjusting experiences to accommodate the lines. But what about restaurants? While Disney World hasn’t shared specifics, we have seen a quiet increase in capacity within the restaurants. So, what does dining at a Disney World restaurant look like now that the parks have been reopened for a few months?

END_OF_DOCUMENT_TOKEN_TO_BE_REPLACED

Star Wars: Galaxy’s Edge opened with a bang at Disneyland Park on May 31, and the Disney World version blasted off a few weeks later on August 29.

And with so much to experience in this immersive new land, we’re taking a look at seven things — big and small! — that you CAN’T miss when you visit Black Spire Outpost on the planet Batuu!

For the Galaxy’s Edge grand openings, only one of the two major rides was ready to roll at first: Millennium Falcon: Smugglers Run. END_OF_DOCUMENT_TOKEN_TO_BE_REPLACED

has opened its gates, and we’ve explored the planet of Batuu and its pock-marked village, Black Spire Outpost, to bring you the Ultimate Guide to this brand new land. The citizens of Batuu (a/k/a cast members!) use many unfamiliar expressions when interacting with each other and with guests. You might start your visit hearing “Bright suns”, which is Batuu for hello. “Till the Spire” is one way to say good-bye. But if you’re leaving Black Spire Outpost to return to Earth (i.e. Disneyland Park), you might hear a citizen ask if you’re “going off-world”. There are some Star Wars-themed expressions that contribute to the spirit and backstories of the land. END_OF_DOCUMENT_TOKEN_TO_BE_REPLACED

, and last evening, Disneyland President Josh D’Amaro shared a picture on his Instagram that is blowing. our. minds. It’s a sea of “inhabitants of Batuu” gathered for a cast member rally in Galaxy’s Edge, and it’s EPIC! In the image we see hundreds of cast members in costumes designed to help them set the stage as Citizens of Batuu. (Click here to see  Galaxy’s Edge costumes up close!) In the background: the impressive Millennium Falcon showcased in the land’s first major attraction Millennium Falcon: Smugglers Run. Further back, we spy a delivery shuttle on the top of the land’s fast casual dining spot Docking Bay 7 Food and Cargo. The skyline of Black Spire Outpost features jagged rock outcroppings, while buildings show the wear-and-tear of galactic life.

Are you ready to go inside Galaxy’s Edge? Let us know what you’re MOST ready to see or experience! We’ll do our best to get to it all! END_OF_DOCUMENT_TOKEN_TO_BE_REPLACED

We were able to literally set foot into Star Wars: Galaxy’s Edge last week to catch a glimpse of the incredible land in Disney’s Hollywood Studios. While photos were not permitted, you can read about what we saw here!

But today, YOU can take your own first look, because D23 has released photos which will allow everyone to peek inside Star Wars: Galaxy’s Edge. And it looks seriously INCREDIBLE. So, let’s explore this insanely detailed land together!

Naturally, those famous Disney details will extend to all five dining options in Galaxy’s Edge, including the land’s fast-casual restaurant, Docking Bay 7 Food and Cargo where below you’ll see examples of details that tie in important Star Wars history and information.

Docking Bay 7 Food and Cargo will be packed with crates carrying the finest food ingredients from all over the galaxy to the kitchen of Chef Strono “Cookie” Tuggs. The 80 seen in these two photos (above and below) is a reference to the year that The Empire Strikes Back debuted in theatres. Pretty cool, right? Also, be on the lookout for 77 and 83, the years that the other two films from the original trilogy were released! END_OF_DOCUMENT_TOKEN_TO_BE_REPLACED

It’s just a matter of weeks until we get to explore all of the new restaurants and dining locations at Black Spire Outpost in Disney’s Star Wars: Galaxy’s Edge! And today we’re getting a little more insight into the menu items available on Batuu!

The Official Disney Parks Blog highlighted a Star Wars: Galaxy’s Edge Chef in its ‘Every Role a Starring Role” series this morning, and she’s giving us insights into the cuisine coming to Black Spire Outpost! Chef Amy Benson leads a team of chefs who will execute the menu for Disneyland’s Star Wars: Galaxy’s Edge when the land opens on May 31. END_OF_DOCUMENT_TOKEN_TO_BE_REPLACED

We can’t wait to explore a new land — regardless of the story behind it! Galaxy’s Edge is described as being immersive, and the best part of that is that immersion doesn’t necessarily require you to know what everything is. END_OF_DOCUMENT_TOKEN_TO_BE_REPLACED Where is a hungry visitor supposed to go when traversing the Black Spire Outpost on the Planet Batuu in Star Wars: Galaxy’s Edge?

As it turns out… lots of places! But today we’re taking a closer look at Docking Bay 7 Food and Cargo which will open along with Star Wars: Galaxy’s Edge in Disneyland this summer and Disney World’s Hollywood Studios this fall. END_OF_DOCUMENT_TOKEN_TO_BE_REPLACED