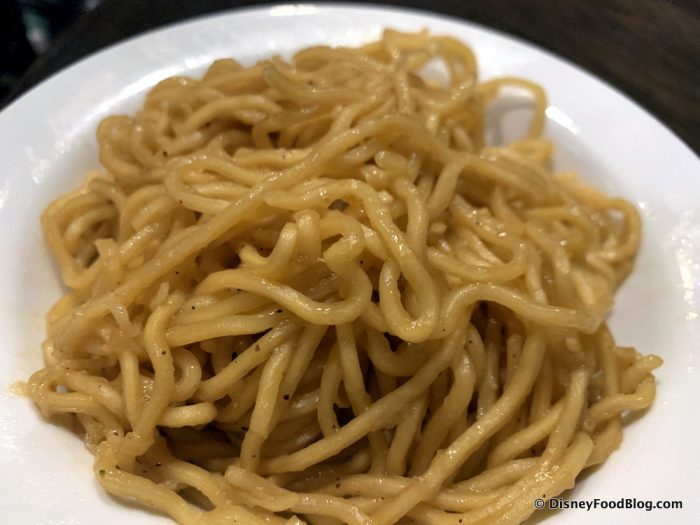 RIP $5 NOODS. You were too pure for this world!

The much-beloved $5 Noodles from Tambu Lounge are NO MORE. Haven’t got a clue what we’re talkin’ about? Gather near to us DFB fam, and we will tell you a tale of the golden, glistening Teriyaki Noodles for $5… that WERE NEVER MEANT TO BE!

END_OF_DOCUMENT_TOKEN_TO_BE_REPLACED

Have you ever wondered how Disney’s Polynesian Resort celebrates Christmastime in Disney World? Although their approach is a bit more lei-ed back, their Christmas decorations are totally on point!

END_OF_DOCUMENT_TOKEN_TO_BE_REPLACED

Pssst! Hey you! We’ve got a secret to share with you that will BLOW. YOUR. MIND!!! Did you know that there’s a whole secret world of food happening at the Disney theme parks?! Get ready to head down Main Street U.S.A.!

That’s right — in addition to the already immense published menu offerings at the Disney resorts and theme parks, there are ALSO a bunch of hidden menus located throughout Disneyland and Walt Disney World!

END_OF_DOCUMENT_TOKEN_TO_BE_REPLACED

Welcome back, DFB foodies! We’re here with another What’s New at the Monorail Resorts in Disney World. We’ve got lots of construction, entertainment, merch, and food updates for ya, so let’s dig on in!

END_OF_DOCUMENT_TOKEN_TO_BE_REPLACED

We’ve got huge heart eyes for  ‘Ohana at Disney’s Polynesian Village Resort — we just don’t always have the funds to indulge in their unlimited tasty meat skewers, teriyaki noodles, and signature bread pudding as often as we’d like to! (Especially dem noods!) And while we’ve always had a knack for finding crafty ways to get our favorite ‘Ohana eats on without booking a Dining Reservation for the super spendy restaurant — like this super under the radar $60 twilight feast or how you can secretly get ‘Ohana’s famous bread pudding after 4PM at Tambu Lounge — we just unearthed even more ‘Ohana secret menu items!

END_OF_DOCUMENT_TOKEN_TO_BE_REPLACED

We’re happy to report that our dear friend Avocado Toast is STILL having a moment at Disney World as we just discovered a new version of this super-trendy eat! Is it a meal? Is it a snack? Who really knows! What we DO know is where you can get your hands on this tasty little number!

END_OF_DOCUMENT_TOKEN_TO_BE_REPLACED

“Welcome aboard the Walt Disney World Monorail — your highway in the sky!” Monorail in the Contemporary

It’s time for a trip around the Monorail Resorts today as we visit Disney’s Contemporary, Polynesian Village, and Grand Floridian Resorts! So, “Please stand clear of the doors…” END_OF_DOCUMENT_TOKEN_TO_BE_REPLACED

There were a few announcements from Disney today about new menus, additions, and more at popular locations in both Disneyland and Disney World. We’ve already tried some of these items, and the rest are on our to-try list, so stay tuned for reviews and updates! We’ll start out in Disneyland with the brand new menu we reviewed earlier for you. Disneyland’s Hungry Bear has a brand new menu that includes this Cherry Coca-Cola Funnel Cake plus new sandwiches and burgers.

Be sure to read our review of the new Hungry Bear Menu here!

In Disney World, at Epcot’s Coral Reef Restaurant, you’ll now find a whole stuffed Maine lobster that comes with crispy baby potatoes, asparagus, béarnaise sauce, lemon, and butter. Read our latest review of Coral Reef Restaurant and see if we thought it could rise to the surface or not.

END_OF_DOCUMENT_TOKEN_TO_BE_REPLACED

As far as what’s changed… well, you may have to take a pretty close look. END_OF_DOCUMENT_TOKEN_TO_BE_REPLACED

We took a Monorail tour of the Magic Kingdom resorts to find all that’s new for you! We started out in the Contemporary Resort. Hello from the Contemporary

What’s New at the Contemporary Resort

We let you know earlier about the Latte Art at Contemporary Grounds. If you’re having a latte this is a fun way to add a smile to your cup of coffee.